Editor’s Note: This whiskey was provided to us as a review sample by Balcones. This in no way, per our editorial policies, influenced the final outcome of this review. It should also be noted that by clicking the buy link towards the bottom of this review our site receives a small referral payment which helps to support, but not influence, our editorial and other costs.

Everything is bigger in Texas. That rings true with Balcones’ offering of  one of its lates single malt whiskeys. It is big, bold, and a strong offering for an American whiskey. But does a rushed aging process aid or detract from the true potential of this pleasant American single malt?

Single malt whiskey, in my humble opinion, is the gold standard for grain-based alcohol. It is also the lifeblood of Scotland, the pioneers of single malts. American distillers have potentially produced single malt whiskeys for as long as stills have spewed their astringent liquid gold in these here United States. The difference is that the American palate seems to have always strayed more towards the sweeter end of whiskey instead of the peated (smokey), or earthy notes that distinguish many a Scotch.

That is not to say that whiskey or even Scotch has to have that smokey characteristic to tip it into excellence. It is more about the crafting and balance that is put forth to deliver a well-rounded and exciting drink.

Balcones, founded in 2008, has done a lot in their short life. They recognize the importance of tradition while striving to define their brand alongside a slew of other American whiskeys. Multiple awards decorate their shelves, but the proof is in the pudding and head distiller Jared Himstedt is striving to define what an American single malt can be, rather than trying to recreate a scotch. His background as a brewer comes through in his flavor profiling.

They are also taking the path of least resistance by incorporating Scottish built copper pot stills and a portion of their grains from Scotland in their distilling process.

Even with all this tradition and thoughtfulness they do fall into a bit of the American trap that faster is better. This single malt is aged for up to 36 months, which if you want to see full maturation you need to have patience. I buy the fact that due to the heat and weather conditions in Texas, aspects of the aging process appear to be accelerated, but the refined smoothness that is inherent in aged single malts is highlighted by the lack of maturity in this spirit.

The rushed aging leaves flavor on the table and makes for a better mixer than a sipper. 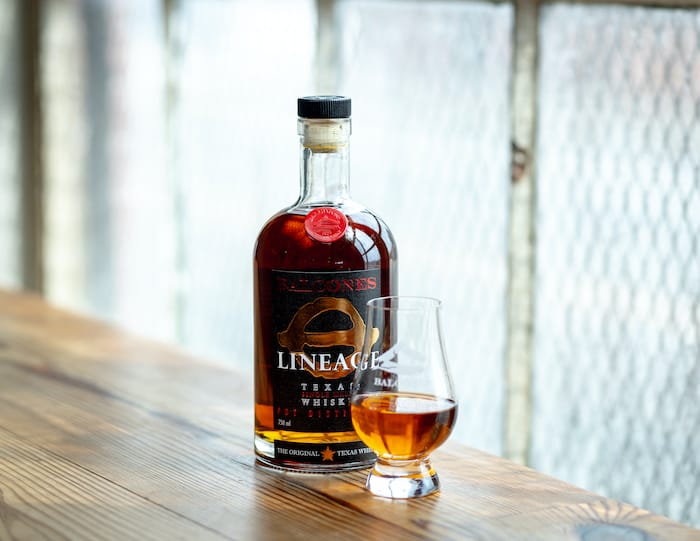 Vital Stats: Made with both Scottish and Texas grown barley this whiskey nods to the traditions of the single malt Scotch while bringing a bit of the US to the mix. Lineage is pot distilled and clocks in at 47% alcohol. The whiskey also uses refill and new oak barrels and is never chill filtered or colored. Prices around $40 per 750 ml bottle.

Color: As the liquid dances in my glass, I catch a lovely amber or honey color with prominent legs streaming down the side of my glass.

Nose: The first note I detected was of sweet corn with a hint of molasses. These sweeter notes were followed by a pleasant light oak and just a hint of chalkiness kin to Necco Wafers.

Palate: A strong oak front defines the first sip chased with a hint of citrus. The heat coats the mouth and lingers but is not overly prickly or obtrusive. Pleasant balance of sweet and spice makes this whiskey considerably easy to drink. The taster is treated to additional notes of cane sugar, a bit of cinnamon, and baking spices such as clove and nutmeg.

It has a buttery mouthfeel and finishes with a quick bite of black pepper on the end.

I enjoyed my experience of tasting Lineage. I hope that somewhere in their warehouse they have squirreled away some small batches to sit and age for longer to see what the true potential of their process and talents can turn out.