Editor’s Note: This whiskey was provided to us as a review sample by A. Smith Bowman. This in no way, per our editorial policies, influenced the final outcome of this review. It should also be noted that by clicking the buy link towards the bottom of this review our site receives a small referral payment which helps to support, but not influence, our editorial and other costs.

A Smith Bowman Cask Strength Bourbon is a new, permanent expression that has been added to the portfolio of the namesake Virginia distillery. This distillery has already gained some prominence for their single barrel, small batch port barrel finish, as well as being the home of Virginia Gentleman for many years.

Since 2003, Sazerac has been the parent company of the brand and distillery and their portfolio already includes some very prominent bourbons, particularly from the Buffalo Trace distillery in Kentucky. So in order not to be overshadowed by their other siblings, A. Smith Bowman seems to have focused on the “craft”and experimental side of the bourbon niche.

Cask strength whiskeys are becoming more and more prevalent, and many whiskey fans and connoisseurs often look to these releases as truer expressions of the distillers original intent. And, the higher proof really makes you pay attention to all that is going on with the flavor profile. However, the first thing you notice with this one is that cask strength is 141.1 proof.

Now, to me, it’s not the shock of tasting a whiskey with this high of an A.B.V. (and wondering if I had better clear my schedule for the rest of the day), but it’s more a sense of wonder of how they got there.  Without going into a bourbon 101 lesson, I’m just wondering how you can get from 125 to 141.1 proof. You would expect, and it is usually the case, that the bourbon that goes into the barrel at 125 is going to gain some proof over time through absorption in the barrel and evaporation, or angel’s share. This bourbon has been aged for 10 years, relatively ancient for bourbon, but the angels in Virginia must have a more demanding tax system.

A. Smith Bowman has a unique approach to distillation. Their bourbons are triple-distilled. While not unheard of with bourbon, triple distillation is more often associated with Irish whiskeys and some Scottish whiskies, particularly coming from the Lowlands region. Instead of fermenting onsite, A. Smith Bowman also famously uses unaged distillate from Sazerac’s most well known distillery, Buffalo Trace, as the base of their production. Once it arrives, it’s distilled on A. Smith Bowman’s two stills, which are named after the Bowman Brother’s parents, Mary and George, with George being a 500-gallon hybrid pot still.

This is intriguing and exciting to me. Much like a secondary finish when it comes to aging bourbon, this is a creative approach to making your expression stand out. And, already judging from the deep-cherry red color present in the bottle, I think this may have some particular qualities to offer.

Let us get to tasting. 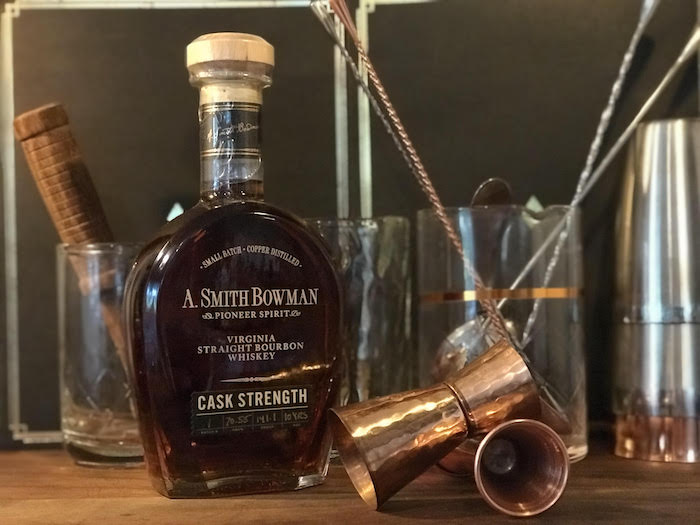 Nose: An intense, sweet aroma that you can pick up from across the room, like a familiar cologne.  Cherry and oak also presents itself, though none of it is overwhelming or unpleasant.

Not for the faint of heart, but definitely enjoyable. If you found yourself with a bottle of this, please invite a whiskey loving friend over and bust it out when you would have time to pay attention. Be prepared for a long “Ooooo” from your guest followed by a “that’s good”.