Editor’s Note: This whiskey was provided to us as a review sample by Treaty Oak Distilling. This in no way, per our editorial policies, influenced the final outcome of this review. It should also be noted that by clicking the buy link towards the bottom of this review our site receives a small referral payment which helps to support, but not influence, our editorial and other costs.

Good whiskey is in the eye of the beholder. But there are certainly elements to look for when making a decision as to which bottle to dive into. I personally look for balanced layers of flavors, and enough heat to wake up the palate. When it comes to bourbon in particular, my palate sways to the more earthy notes of wood, and leather instead of the sweetness associated with many Kentucky-style bourbons.

Founded by Daniel Barns, Treaty Oak Distilling started out by mostly making gins. As they refined their process from pot stills to column stills and relocated to their company’s namesake, Treaty Oak, Texas, in 2016, they were able to expand their production and sustainability concepts with an eye on the future of distilling and a focus on sourcing the building blocks for their whiskey from local farmers. Not only that, they decided to focus on traditional barreling and aging to build flavors and character instead of rushing the process with modern shortcuts.

When I poured myself a glass of Treaty Oak’s Cask Strength version of their Ghost Hill Texas Bourbon, these were the first things I went hunting for. How does this homegrown, locally sourced, cask strength bourbon deliver on traditional bourbon characteristics? Is it able to balance its sweet and its heat to deliver an immersive sipping experience? 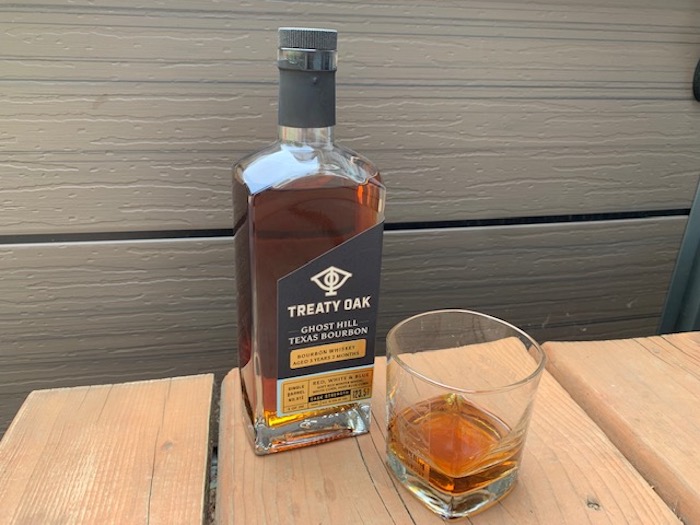 Nose: This whiskey exhibits a woody nature with its first wafts. There are pleasant buttery notes, a hint of banana and caramel on the sweet end of the spectrum, and a soft note of corn and dried grains that precede the whisper of ripe cherry that finishes out the nose.

Palate: Straight, this bourbon delivers a wood forward flavor of fresh-cut cedar planks. There is a prickly heat that wakes up the tongue but does not overpower the flavors. The rest of the flavors in this robust sipper trend towards leather, corn, and a bit of toasted corn kernels heating up in an air popper.

Over ice, which is how I recommend drinking this one, the corn and wheat flavors come forward and the heat is smoothed out, coating the tongue and throat in an even heat. This is not an overly sweet bourbon. There is a subtle caramel flavor, but vanilla and a subtle bitterness like a marshmallow left over the flame a bit long mixed with baking chocolate are more prominent. The spicy notes that pop are of white pepper and clove and there is a pleasant aftertaste of fresh baked bread.

Not every whiskey transports me to another place. But this campfire sipper out of Texas took hold of me and dropped me into the high desert in spring, sitting near a hearty fire with good conversation and laughter. It is bold, rich, and full of conversation starters. An excellent example of passion and vision executed successfully.