Editor’s Note: This glass was provided to us as a review sample by Glencairn. This in no way, per our editorial policies, influenced the final outcome of this review.

It should also be noted we’ve teamed up with Glencairn to give away a set of these glasses to one lucky winner – visit our contest page for more details before the end of December 13th, 2020.

In Davidson’s reaction to the massive success of the black Glencairn he stated, “So in response to public demand, our 20th anniversary gift to loyal fans of the Glencairn Glass across the world is the introduction of this colorful new range, which is here to stay.” In addition to the traditional clear Glencairn, the glass now comes in Olympic ring colors of blue, red, green, black, and shimmering gold.

The glasses will be sold individually at £8 (~$10 USD) if you want a specific color, but the Glencairn Colored Glass Whisky Set sells for £60 (~$78 USD). The set comes in a nice presentation box. They are made of lead-free crystal. Unlike the clear glass, the colored ones aren’t customizable, nor do they come in the cut-crystal variation.

To my surprise, colored crystal does not make up the new glasses. Instead, they are treated with a sprayed coating, and though durable, it is only possible to decorate with a low temperature curing ink. When holding the colored glass, I noticed that it has some bubbles on the coating. Not on all the colored glasses. You mostly feel them as you have to look super hard to see them on the glass.

But I can’t see my whisky through the colored glass? That is the question, or main complaint, I have seen across the worldwide web. Well, on one hand, the color of whisky is not reliable in general. On the other hand, without being able to see through the glass clearly, it’s hard to determine how the whisky behaves. For example, seeing the legs of the whisky can help determine proof.

Since The Glencairn 20th Anniversary Colored Glass Whisky Set is the first colored set, I’m hoping this is a gateway to other sets. Personally, I’d love to see a Pride edition with variants for Bi-, Trans-, and BIPOC-Pride. The Glencairn glass has reached 140 countries across all seven continents. Yes! Including Antarctica. Adding colored glassware options is an opportunity for inclusivity in the whisky world that has been infamous for being a “Boy’s Club.” 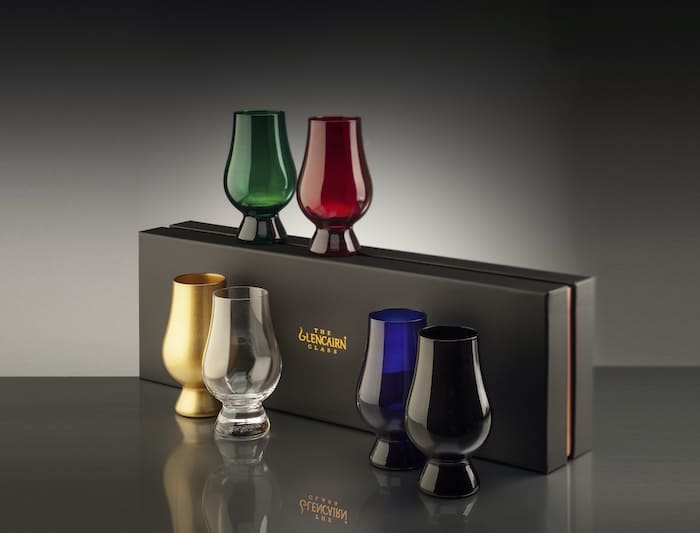 The new range of Glencairn colored glasses (image via Glencairin)

Care Instructions: Hand-wash only. While the coloured coating is durable, washing in the dishwasher can dull the finish and leave scratches.

Final Thoughts: I highly recommend The Glencairn 20th Anniversary Colored Glass Whisky Set. It helps to sort out the whiskies you’re tasting and keep them straight. You don’t have to label the clear ones with Sharpie, or by some other means. There still the traditional Glencairn, you just can’t visually see the whisky you’re tasting except the clear glass one.

If you already have clear Glencairns, then you could just buy the colored glasses individually to make a set. You don’t have to buy a whole new set if one breaks. I’m a glassware hound, so I have to have these. The blood red Glencairn is my favourite.