In March of last year, just before the pandemic curtain came down, I reviewed the 2019 Garrison Brothers Cowboy Bourbon. “If you like the thought of a rattlesnake in your glass, have the scratch for a high-end bourbon, and live in one of the 21 states where it’s distributed, you can bet that it won’t be boring,” I wrote. (It still takes scratch, since the average price for a bottle of Cowboy Bourbon online these days is $390.)

At the time, I identified toffee, sweet-tart cherry jam, marshmallows, vanilla, mint chocolate, and warm figgy pudding flavors in the whiskey. “Starts off spicy and warm on the front of the tongue,” I wrote, “and ends with a long, luxurious finish at the back.”

Despite its high alcohol content (68.65% alcohol, or 137.3 proof), I utterly enjoyed reviewing the 2019 Cowboy and consider it a memorable pour.

This is the point at which the 7th Flag Imperial Porter from Oskar Blues Brewery enters our story. It’s brewed in Austin, Texas, aged in Garrison Brothers barrels and, like the Cowboy, arrives packing a wallop. With a 10.3% alcohol content Oskar Blues calls, “a big, barrel-aged behemoth,” it’s not likely to appeal to light beer fans.

The question I wanted to answer was whether it would appeal to whiskey drinkers. Or, at a minimum, to decide if I could taste the Garrison Brothers legacy in the Oskar Blues cans.

The problem is that I’m a whiskey reviewer, not a beer guy. So I recently packed what’s left of my 2019 Cowboy Bourbon along with a four-pack of 7th Flag cans to visit Andre Munier, a beer writer and reviewer in the craft-brew capital of Portland, Ore.

First, we played a round of golf. Sufficiently humbled, we then retired to Andre’s back yard to answer the important questions of the day. First among them was whether any trace of Garrison Brothers remains in the finished beer. An imperial stout, after all, is no slouch in the taste department and could easily overwhelm subtler notes from the barrels. 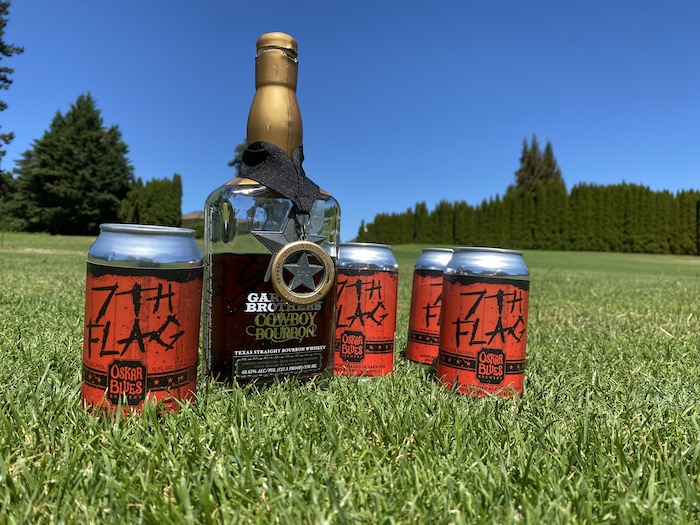 “Definitely, there’s a family resemblance,” the beer reviewer ruled, after sipping both whiskey and beer. “You can’t miss it when you try them side by side.” I concurred.

The second, and perhaps more difficult, question is whether 7th Flag is good beer. Good enough to recommend to readers of The Whiskey Wash. This is where our palates diverged, and we each started to pull out what we liked and disliked about the brew.

Andre told me that Oskar Blues is a pioneering and respected brewery, and was among the first to put craft beer into a can – back in 2002. His initial reaction to the 7th Flag, which is the color of black coffee, is that it’s sweeter than most imperial porters. “That might be the bourbon influence,” he said.

My less-refined beer palate found hints of espresso and chocolate. There is an underlying sweetness, I agreed, but I don’t drink enough porters to be able to know whether that’s normal or not.

Andre thought he tasted cacao nibs, and that the bourbon and the beer share a similar mouthfeel: “Creamy, soft, pillowy.” He liked the beer, but thought the bourbon sweetness might have translated better if Oskar Blues had instead made a milk stout or candy stout with the barrels.

Since I couldn’t tell a milk or candy stout from your average Guinness at Safeway or Publix, I was at a disadvantage here. But I liked the beer, too, and thought the finish reminded me of the nutty and rich flavors of pecan wood. There’s definitely something wood-based going on in there.

Bottom line and the most important question of all: Would I bring this beer out for friends at a backyard barbecue? The answer, without hesitation, is that I would. The beer is complex and interesting, both of which I consider to be a positive. (Not everyone does.) The fact that it comes with a whiskey-related backstory, though, is what makes it a slam dunk in my book.

242
Shares
780
Views
Share on FacebookShare on TwitterGet Our Newsletter
Get The Macallan® Rare Cask at ReserveBar. Shop now!