My brother once picked up a Knob Creek bourbon for me at Binny’s Beverage Depot in Chicago. What makes that particular bottle of Knob Creek interesting is that it’s a store-pick straight out of the barrel just for Binny’s, and clocks in at 134.3 proof. I pull it out now and again to pour for whiskey lovers, but mostly as a novelty: “If you like Knob Creek, here’s a rocket-fuel version you’ll find super interesting.”

I gravitate to cask-strength and single-barrel releases generally. Even so, the 134-proof Knob Creek always seemed a little hot, a little boozy. So what to make of the latest version of the Garrison Brothers Cowboy bourbon, released at 137.3 proof and, according to the distillery’s tasting notes, offering “a pleasing hiss like a snake’s rattle as it settles in and numbs the tongue”?

By all accounts, this is good juice. Twice in the past six years, the Cowboy was named American Whiskey of the Year by Jim Murray’s Whisky Bible, and I’ve seen this latest release on several recent lists of top-ranked whiskies. Garrison Brothers lays claim to “the first bourbon whiskey legally made in Texas” – way back in 2010 – and cites the high heat and wide temperature swings at its Hye, Texas, distillery for squeezing more flavor in less time out of its grains than would be possible in bourbon’s Kentucky heartland.

Still, what to make of that 137.3 proof? The short answer is that it grew on me. The first time I opened the bottle, it seemed too spicy for me to break down distinct smells and flavors. But when I tried it again a few days later, and then a third time a few days after that, I was able to divine more out of it. I liked it. A lot.

This was the 2019 bottling. Dan Garrison says another Cowboy will be released some time in 2020. If you like the thought of a rattlesnake in your glass, have the scratch for a high-end bourbon and live in one of the 21 states where it’s distributed, you can bet that it won’t be boring. 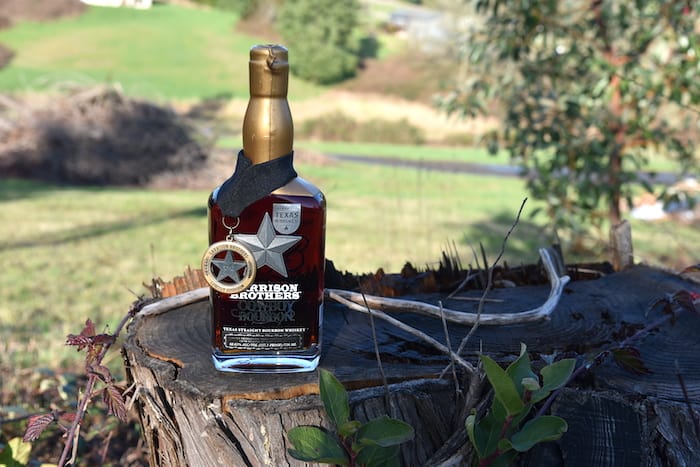 Vital stats: Mash bill of 74% corn, 15% soft red winter wheat, 11% two-row barley, aged five years; sold out at the distillery and most retail locations, though available a handful of places online for $250 and up for a 750ml bottle. 68.65% alcohol by volume/137.3 proof. Each of the 6,440 bottles is hand numbered and signed by master distiller Donnis Todd, and comes nestled on a satin pillow inside a custom oak box.

Palate: Toffee, sweet-tart cherry jam, marshmallows, vanilla, mint chocolate, warm figgy pudding. Starts off spicy and warm on the front of the tongue, and ends with a long, luxurious finish at the back. Once it’s had a little air, it’s not boozy.

Dan Garrison says the original Cowboy bourbon was a fluke. He had a number of experimental barrels he was considering for a small-batch release back in 2008, but none of them were quite right. When he discovered that legally dumping that much booze can be difficult, he decided instead to blend them all together to see what would happen. Thus was born the first Cowboy bourbon.

Donnis Todd has been refining the recipe ever since, while keeping it anchored at the high end of the alcohol spectrum. It’s a good thing he has. A bourbon at 137.3 proof ain’t for everybody. If you like it hot, though, this is a whiskey you want on your shelf.