Editor’s Note: This product was provided to us as a review sample by Elijah Craig. This in no way, per our editorial policies, influenced the final outcome of this review. It should also be noted that by clicking the buy link towards the bottom of this review our site receives a small referral payment which helps to support, but not influence, our editorial and other costs.

Named for the 19th Century Baptist preacher who is (dubiously) credited with the “invention of bourbon,” The Elijah Craig line of whiskeys from Heaven Hill Distillery is likely a staple at your local liquor store. Late October, 2021, was busy at Heaven Hill. In the midst of Old Fashioned Week celebrations, a tentative agreement was reached between workers and management to resolve a six-week strike.

The Old Fashioned week festivities included a sweepstakes promotion to win a Home Bar Kit containing the necessary accoutrements for amateur cocktail production: an attractive crystal mixing glass, a long handle swirl-patterned bar spoon, Julep strainer, and a comfortable promotional cap. Also included in the kit are a bottle of Elijah Craig’s Old Fashioned cocktail syrup (more on this in a moment) and a copy of Robert Simonson’s The Old Fashioned. Mixology is not my strongest subject but I truly enjoyed this 158 page compendium of lore, documented history, and–crucially for me–recipes for the venerable cocktail, to the point that I was eager to try my hand making a few.

The barware provided in the kit looks nice and is self-explanatory to amateurs such as myself, with a mixing vessel sizable enough to make shareable quantities of Old Fashioned. For my first attempts, I followed the instructions on the bottle of syrup mix to make a quality, balanced cocktail highlighting the foundational whiskey. The results of further tests using scratch ingredients without the aid of pre-mixed syrup produced mixed results as I worked out the proper balance of ingredients and got to know just how bitter those bitters I purchased were. My pride in DIY experimentation doesn’t preclude me from praising the cocktail syrup which enables those of us with limited bar chops to produce a solid libation- the best drink I made was a completely by-the-label mixture of Elijah Craig and cocktail syrup with a sprig of rosemary added.

The Elijah Craig Small Batch Straight Bourbon that forms the backbone of these cocktails is produced from a mash bill of 78% corn incorporating 12% barley and 10% rye. A limited number of barrels selected by master distillers are blended to create the final product. Age statements were dropped from the Small Batch label in 2016 in order to extend inventories as demand for this popular bourbon outstripped supply. Here’s a pocket-sized set of tasting notes for the bourbon on its own, outside of the Old Fashioned context: 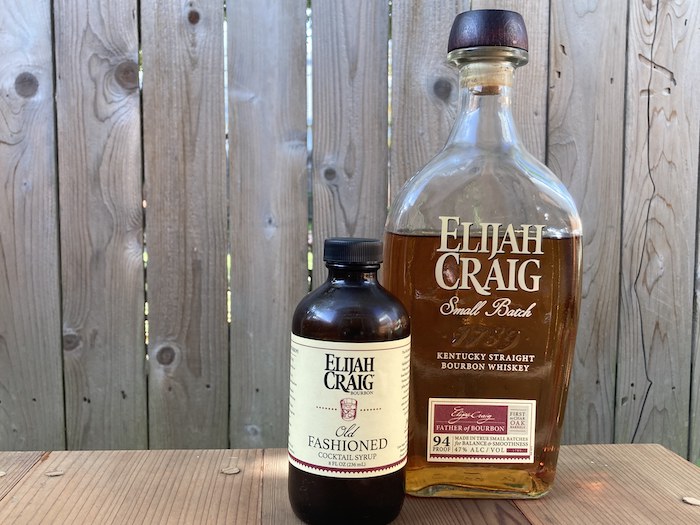 Appearance: Reddish-gold with a medium-light body

Nose: Pleasantly sweet on the nose. The high balance of corn in the mash is obvious with aromas of maraschino cherry, vanilla, and faint spice

Palate: Vanilla picks up where the sweetness from the nose left off, quickly giving way to heartier, minty-woody warmth.

As far as promotions go, I’m a fan of Old Fashioned week. I’ll admit I’m no cocktail expert, but the Old Fashioned is my go-to when I’m ordering mixed drinks and I enjoyed getting the hang of making them myself while also learning a bit about the drink’s history.

Elijah Craig Small Batch is often an early stop in a bourbon drinker’s journey. It is widely available and displays the classic bourbon flavor profile with a balance that is accessible but by no means “dumbed down.” This is a bottle that I’d definitely recommend to casual bourbon drinkers. It will not surprise more seasoned bourbon enthusiasts, but it will not disappoint them either.

North American whiskey drinkers are fortunate to have a lot of really good options at this price point and will have their own individual favorites to suit their palates and preferences and this bottle has what it takes to be a go-to on your bar cart if you’re so inclined. Elijah Craig Small Batch Straight Kentucky Bourbon is versatile enough to sip neat or play a starring role in a cocktail. The occasion for this review may have been Old Fashioned week, but I’ll bet this makes a good Julep too.