Why Rye? A Journey Of Flavor Generation From Crop To Cask

Sazerac, Manhattan, and my favorite, the Boulevardier – rye whiskey plays a critical role in the cocktail scene, making for a superb base for classic and nouveau cocktails alike (or on the rocks…and hold the rocks too).  There’s something about the flavor profile, that quintessential baking-spice character of rye whiskey that spiffs up the drabbest of drams.  But why?  What about this alluring elixir makes it so unique and quaffable?

One could surmise that it is due to rye whiskey’s requirement of at least 51% rye grain in the mash-bill versus bourbon’s requirement of majority corn.  Not an inaccurate summation as it does all start with the rye, but the journey through the whiskey-making process also plays a critical role in the creation of that beloved aroma.

From crop to cask, there are key processes that occur during production that impact the final outcome.  But before we take the guided tour (nerd option) into whisk(e)y-town, let’s put on the brakes and first take a crop-stop to discuss why rye grain itself serves as the ideal flavor launchpad.

Rye, Secale cereale, belongs to the Grass family, akin to corn and barley; however, rye has many unique traits that separate it from other species.  One example being its winter-hardiness, with a tolerance and ability to thrive in colder and harsher climates.  However, it’s rye’s unique chemical makeup that differentiates it in terms of processing requirements and more importantly, flavor development.

Within the rye kernel, there are high levels of structural cell wall compounds called beta-glucans and arabinoxylans.  These compounds increase the viscosity of the mash, making it difficult to mix and pump; however, when arabinoxylans are degraded, they have a significant role in the ultimate formation of that warm, spice-filled bouquet of aromas. 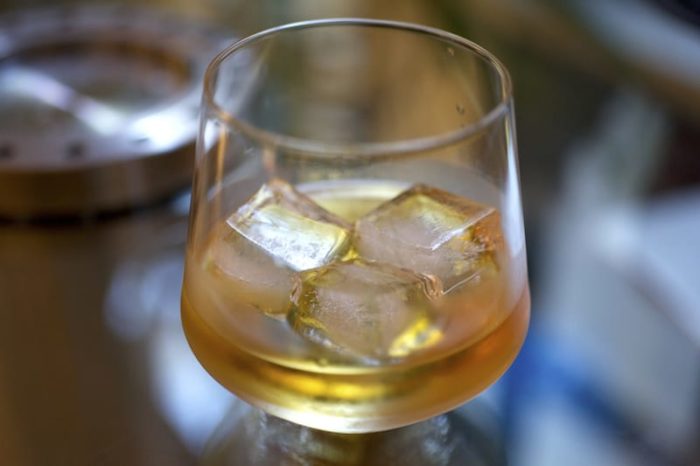 Digging a little deeper into the kernel structure, arabinoxylans are commonly cross-linked (connected) to lignin.  Together, the lignin and arabinoxylans are largely responsible for the kernel’s rigidity and structure.  Hydroxy-cinnamic acids (HCAs) are among the class of compounds that form these cross-linkages.  As the name suggests, these compounds are precursors to notes of cinnamon, clove, and anise – the very essence of baking-spice.  Sadly, they are trapped within the kernel’s cell wall, but can be freed during the milling and mashing processes.

After intake into the distillery, the cereals are milled in preparation for mashing.  This is important as smaller particles enable the dissolution of all available kernel components, including arabinoxylans and HCAs, when mixed with water in the mash-cooker.  Mashing typically consists of a few carefully selected temperature rests to encourage the solubilization and degradation of the grain starch into fermentable sugars, which enables yeast to produce alcohol.  Rye mashing regimes can often include a special rest to breakdown arabinoxylans, thus promoting the enzymatic release of the aroma precursor, ferulic acid (FA), typically with the help of some added enzymes.

Upon the completion of this stage, the mash is pumped into a fermenter and inoculated with yeast so fermentation can begin.

Yeast strain selection is critical to ensuring the journey to that baking-spice character continues.  As with humans and other living creatures, there are small differences in our genetic material which makes each of us unique; the same is true for our friend, Saccharomyces cerevisiae (yeast).  One key difference is the ability for some strains to transform FA into a compound called 4-vinyl guaiacol (4VG), which has a spicy, clove-like aroma.  While the majority of these notes are generated from the yeast during fermentation, there can be some secondary contributions from thermally driven FA transformation during mashing.

Regardless of origin, the 4VG carried into or created during fermentation will eventually meet some sort of distillation apparatus where it’s fate will be determined – does it stay or go?

As each yeast strain has unique characteristics, so does every compound, and this is exploited during distillation.  When fermented beer is heated in the still, different compounds volatilize at different temperatures.  Similarity to ethanol’s volatility heavily influences how much of each compound will be carried over into the distillate.  While 4VG and other similar volatile phenols contribute to the rye-spice profile, their volatility is not that similar to ethanol.

Therefore, operations must be controlled to help carryover these important compounds into the distillate and onto maturation.  Inside heat-treated oak casks, chemical reactions occur slowly which also contributes to the spice character – as wood contains HCAs as a part of their cell structure as well.

While this is typically the most significant source of spice character in other whisk(e)ys, with rye it simply serves as a spice-note amplifier.

Rye whiskey is indeed a special beverage, adding complexity and warmth to the imbibing experience.  While it’s unique flavor attributes are traced back to the rye grain itself, it is the journey from crop to cask that bring this spice-filled liquid to life.

From unique mashing procedures to release FA, to the selection of a compatible yeast strain for 4VG creation, and down to the specific distillation practices concentrating these volatile phenolic compounds, all are integral to the development of this unique flavor profile.  While there is no one right way to make rye whiskey, all of these activities serve as levers available to the distiller in crafting their perfect version.

Shaken, stirred, or sipped…whatever your passion, safe and happy rye-imbibing,

132
Shares
1.1k
Views
Share on FacebookShare on TwitterGet Our Newsletter
Get The Glenlivet 18 Year Old at ReserveBar. Shop now!