Whiskey: Straight from the Barrel and Into the…Can?

Ahh, time for a little whiskey. You grab your favorite, settle back in your chair, pop the top on the can, and—wait, what? The can? There are countless innovations taking place in the spirits world, from unusual grains to accelerated aging to re-use of barrels across liquor types, but canned whiskey might seem a crack in the traditional bottle that’s more gimmick than good.

But it’s not like canned spirits are completely new. Both Jim Beam and Jack Daniel’s put whiskey-and-cola variants on the shelf years ago, and those spawned other canned cocktail-like offerings from those brands. Speaking of cola, Coca-Cola itself is launching an alcohol-infused product in Japan, using shochu, a Japanese spirit. With Coke’s reach, that and other products could conceivably touch U.S. shelves.

But what about canned whiskeys where whiskey is center stage, and not heavily laced with additives? Let’s get global first, and since we’re talking Scotch, we’re talking whisky. Scottish Spirits makes the international aspect truly international: the company purchases bulk whisky from Scotland and imports it to Mexico, where it’s canned and sent out to the world. “The idea originated in 2012 during a trip to Kurdistan when I was asked to bottle Scotch whisky in a can to reduce the weight of the case,” says Reynald Vito Grattagliano, founder of Scottish Spirits. Grattagliano even patented a re-sealable cap under the motto, “Drink some now and keep the rest for later.”

Stillhouse Spirits, out of Columbia, TE didn’t have weight top of mind when it introduced its line of white whiskeys in cans. “We wanted to create something disruptive that has never been done before. Our intent was to avoid cliché and pure novelty, while remaining true in character and strong in attitude. Stainless steel has been used for more than a century in the spirits business to store spirits, but nobody ever thought to use it as the container,” says Brad Beckerman, Stillhouse founder and CEO. 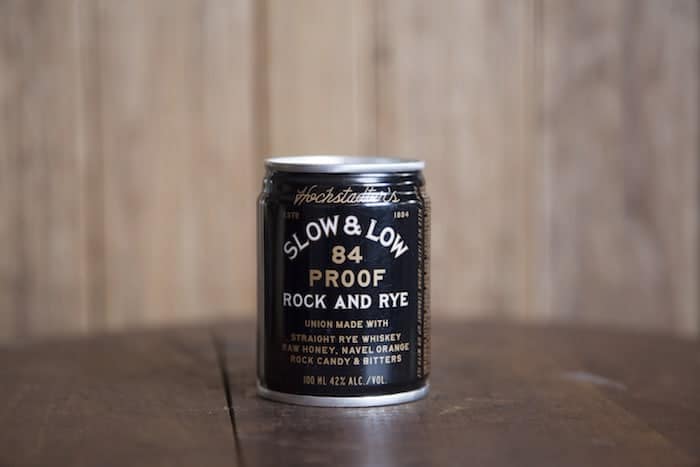 Over in Philadelphia, Cooper Spirits, maker of several straight ryes in traditional bottles, wanted to honor the spirt of their founder Robert Cooper, who had been collecting straight rye whiskey before the recent rye resurgence. “In 2013, we introduced Slow & Low, resurrecting one of the most popular drinks of a bygone era, rock & rye, and reestablishing it as part of today’s modern cocktail culture,” says Robyn Greene, the SVP of Marketing and innovation at Cooper. “Consumers really embraced the ease and convenience of Slow & Low, a high-proof, high-quality bottled old fashioned,” says Greene.

So who are those consumers? For Scottish Spirits drinkers, “People on the beach or playing outdoor games,” says Grattagliano. He doesn’t feel that cans turn traditional whisky drinkers away. “Not at all: the Scotch drinker will also drink while they are on the beach, on a boat or camping. If they have to carry a glass bottles they may think twice. The originality of the cans is the portability and a safe way to enjoy a whisky during outdoor parties.”

Beckerman at Stillhouse, whose canned whiskies include natural (and gluten-free) flavors like peach and coconut, says they have loyal customers across the spectrum. “We aren’t about turning away from a traditional whiskey market, but we are about shattering norms and stereotypes. I had the idea for a clear mixable whiskey that is approachable and that people who don’t typically drink whiskey would want to try. We’re a cross-over whiskey,” he says.

Cooper Spirits’ Greene says the canned Slow and Low has a broad consumer appeal. “Today’s consumer craves products with heritage and authenticity, and we’ve organically captured the millennial demographic. Slow & Low is a high-quality, well-crafted product that’s approachable at a high proof. It’s a great introduction to straight rye whiskey for those who are intimidated by the idea.”

Speaking of introductions, Scottish Spirits is launching an American straight whiskey to sell in a 355ml can under the Williamson 18 trademark, as well as a canned blended Scotch product. Stillhouse’s latest is their Black Bourbon, which they have “rested and mellowed” in roasted small-batch coffee beans. Every one of our interviewees said that the cans for their spirits remained neutral for taste, no matter if opened and stored.

And in case you’re catching a cold, Greene had this to say about their Slow and Low: “It’s based on America’s Original Bottled Cocktail, rock and rye. During the temperance movement, rock and rye moved to pharmacy counters as a pre-bottled cure-all for the common cold, sniffles, sore throats, coughs and any manner of ailment. We have so many consumers who tell us stories about how they remember their grandma or grandpa drinking it for a sore throat!”

Can, bottle or bucket, it’s always good to keep some medicine around.

There are some other canned spirits (usually in cocktail form) making the rounds at retailers. For instance, Cutwater Spirits out of San Diego has a broad line of canned cocktails, like their Gin and Tonic and Bloody Mary, as well as representing in the whiskey line with a Whiskey Highball. That’s your favorite spirit, combined with soda water and a bit of mint. Cutwater’s canned offerings are much lower in alcohol content than our stalwarts above, but you can go from their full-ABV tasting room and on to happy hour at their restaurant if you need the harder stuff.

As for me, I did get a chance to taste some of Stillhouse’s Black Bourbon. I like a bourbon with a little more heat than the Black’s 80 proof, but I tried it in a Manhattan and neat, and found some good bourbon notes of caramel and vanilla, and maybe some butterscotch on the short finish. I think a bit more time in oak would give it a full blessing. As for the coffee beans, my palate must be too jaded, probably from all the coffee I drink daily; their effect was subtle.

And I’m sure that can will make a lovely modernist vase after I’m finished.