If you have never bought a drink in a Utah restaurant, you may not believe this is true but it is … or, rather, was.

They call it the ‘Zion Curtain,’ a barrier that prevents drinkers in Utah restaurants from seeing their drinks being made. Why? Because Utah wants to protect children from being seduced by the glamour of bartending. This has become even more onerous for restaurants in recent years as bartending has become, well, more glamorous.

But now a new law is dragging Utah kicking and screaming into the mid-1930s.

The rule has only ever applied to restaurants that allow children. No children, no problem, so places that don’t admit anyone under 21 have never needed them. 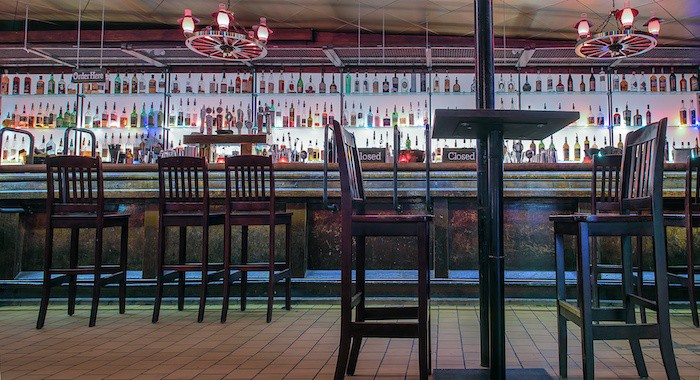 A bar in Utah (image via Al Case/flickr)

The partitions have not always been with us. They were only enacted in 2009 and applied only to new restaurants, built after the law went into effect.

As you might suspect, it’s a Mormon thing. The Mormon faith forbids the consumption of alcohol. Caffeine too, though apparently Starbucks doesn’t have to protect children from the glamour of barista-ing.

As a result of the 21st Amendment to the Constitution, which repealed Prohibition, the beverage alcohol business in the U.S. works in a way that is almost exactly opposite to how all other laws involving commerce behave. It turns the Commerce Clause on its head in many, though not all ways.

Alcohol in Utah and some other states is similar to abortion in many of the same states, in that they can’t ban it altogether so they just try to make it as inconvenient and unpleasant as possible for you to exercise your legal right.

Although no other state has anything like the ‘Zion Curtain,’ every state has its own legal peculiarities when it comes to alcohol. Convenience stores in Indiana may sell beer but not cold beer.

In virtually all other forms of commerce, the U.S. is a single market. The same rules apply everywhere. With alcohol, it is 50 different markets. That complexity and inefficiency is built into the price of every alcoholic beverage you buy.

But remember, it’s for the children.

Just because the ‘Zion Curtain’ is tumbling down, that doesn’t mean the Utah Department of Alcoholic Beverage Control (UDABC) will stop being a pain in the ass. Now all restaurants, including those built before 2009, will have a choice of either creating a ‘no kids zone’ at least ten feet from the bar, possibly through the use of a railing or half-wall, or they can keep the partitions. Restaurant owners have five years to comply, assuming Utah doesn’t change the rules again.

The UDABC is also warning restaurants that the changes they plan to make must be approved before they are implemented, or they could lose their license. Some of the people who were smashing their partitions last week may need to get out the Crazy Glue.

Editor’s Note: This column is reprinted with permission from the author.

53
Shares
168
Views
Share on FacebookShare on TwitterGet Our Newsletter
Get The Macallan® Rare Cask at ReserveBar. Shop now!