In Praise of the Whisky Highball

Those people, whom one could suspect also don’t like fun, are missing out on one of the great joys in life – a refreshing whiskey highball cocktail. 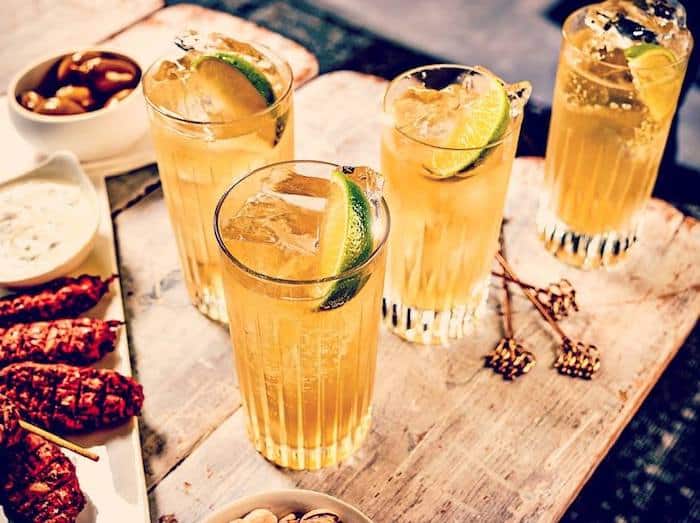 How the highball was popularized

A highball of any kind is base spirit with something fizzy, served with plenty of ice cubes in a tall glass, and perhaps, but not necessarily, a squeeze of citrus or a drop of some other fruit juice. It can be particularly good with whisky. In fact, that’s how it all started on the East Coast.

When spirits consultant Robin Robinson was working as the Compass Box brand ambassador and looking for a drink to introduce the Great King Street blend, cocktail historian David Wondrich referred to documentation he uncovered about the origin of the whisky highball in New York City, and how it evolved to include other ingredients. As Robinson tells it:

“Around the 1890s, a bartender named Patrick Duffy was at an establishment on 22nd St. and 4th Avenue (now Park Avenue South) where they, like other bars, served Scotch whisky straight from a cask, always a blend, and usually hot or mixed with spices and fruit. He was visited on a number of times by a British actor in town to do a show, and the actor was inquiring about specific blends – ‘Mr. Dewars’ or ‘Mr. Usher’. Duffy had unmarked casks and eventually acquired and bottled these for his customers. But during that time, the actor asked for the Scotch in a curious way: over ice and diluted with phosphate or soda water. This became a popular drink throughout that time and led to some other innovations.”

One such innovation, according to Wondrich, took place in upstate New York, where they were serving variations on this drink with other spirits and soda at lake resorts. One called for the addition of fruit juice and wine, making it a bit like a sangria. As Robinson recounts the rest of Wondrich’s findings, he says, “A local songstress would order this regularly and one day, they were out of wine and the bartender replaced it with Scotch whisky. She suggested adding a lime and sugar to it and it caught on with her name attached: Mamie Taylor. Over time, the fruit juices were narrowed down to just the lime with sparkling soda water added, then ginger. A drink is born.”

These days, there are plenty of other styles of whiskey available to drink and mix into a highball. For those purists still rolling their eyes (if they’re even still reading), obviously, one is not expected to toss rare bourbon or Scotch or another prized dram in with some soda and lime here to prove a point. However, there are many fantastic whiskeys out there that are not only good to sip nekkid as a summer day is long, but are even further complemented by a little cold and spritz.

Compass Box Great King Street Artist’s Blend or Glasgow Blend: These blended whiskies (malt and grain) are produced as a throwback to a time when whisky was deliberately made for mixing with other ingredients, especially with a little soda water. The Artist’s Blend is bit lighter and fruitier – best with soda, tonic, and/or a little juice. The Glasgow Blend uses some peated malts, some of which were aged in sherry casks, for richer flavors. This one is best with ginger ale or ginger beer (see below), and even beer cocktails.

Add the juice into a tall glass with ice. Add the whisky and top with ginger beer (the spicier, the better). Top with the lime zest and serve.

As a Japanese drinking ceremony

In Japan, the highball has been considered a highly stylish way to consume whisky in the warmer months since the 1950s, especially since the format pairs so well with Japanese cuisine. The Japanese take their highball cocktails very seriously, and in many places, drinking one involves an elaborate serving process.

Here is the proper highball drinking ceremony according to Suntory Whisky, which suggests using their TOKI blend (made up of malt and grain whiskies from Hakashu, Yamazaki and Chita distilleries) for the occasion in a 1 part whisky to 3.5 parts sparkling water ratio.

I personally like to add an herbal garnish to this combination at the end, particularly a fresh shiso or basil leaf.

Monkey Shoulder Scotch and soda(s): This whisky is a perfect one for converting highball naysayers since it’s already a blend of three fine Speyside malts – Glenfiddich, Balvenie, and Kininvie. The characteristics of each malt react deliciously to certain ingredients, turning fruity with some, getting richer with others. Plain old soda water or tonic does the trick. Or you can try it with some good quality ginger ale (such as Q Drinks) with orange or lemon for a Ginger Monkey, which is a bit like drinking a liquefied ginger snap!

When the weather feels like the sultry backdrop of a Tennessee Williams play, there’s nothing better than relaxing with a cold glass of American, Canadian, or Irish whiskey mixed with some lemon iced tea and soda. Use higher proof whiskey if you want the flavors to cut through (Blanton’s, Knob Creek; Pikesville, Few, Michter’s, Teeling Small Batch) or keep it low and steady for easy afternoon sipping (Knappogue Castle, Canadian Club 100% Rye).

Add all ingredients except the soda to a mixing glass with ice. Roll the mixture, ice and all, between a mixing tin and the glass to aerate a little. Pour into a highball glass, add the soda, stir gently, and add fresh mint as a garnish, if desired.