Glacier water’s remarkable range of uses has just been expanded in a new direction: whiskey production. The Glacier Distilling Company, a locally-owned distillery located in Coram, Montana, next to Glacier National Park, uses glacier water in the production of their craft whiskeys. The distillery uses pure glacial water from the Northern Rockies and locally grown grains to produce an alpine whiskey that brings out the local flavors of the distillery’s surroundings. The company was founded in 2011 and has been steadily growing, with their production doubling each year. The distillery’s success has been attributed to their passion to produce the highest quality of whiskey.

The genesis of alpine whiskey was during the cold winter of 2009-10 when Nicholas Lee, founder of Glacier Distilling, and a group of his friends, were convening around a fire in North Fork, Montana. As they were sipping on whiskey, the group began debating how they would get whiskey if faced with Armageddon. The simple answer – make it themselves. 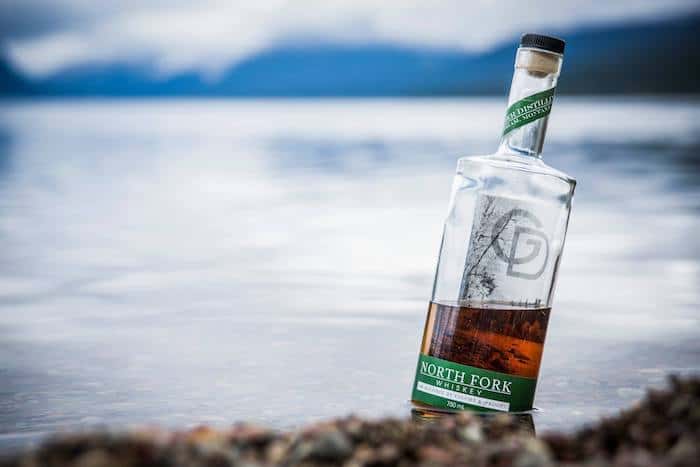 Glacier Distilling’s first product was an un-aged white whiskey called Glacier Dew. Lee was inspired by a story of a woman named Josephine Doody who built her own moonshine business in Glacier National Park in the 1920’s, straight through Prohibition. Lee, originally from North Carolina, was drawn by the allure of making homemade spirits. “We need to be self sufficient out here just in case!” Lee said in an interview with NBC Montana.

As Lee’s business grew, the company’s liquor collection also expanded to 19 different products, including gin, vodka, brandies, absinthe and other liqueurs. Glacier Distilling is just six miles away from Glacier National Park, which hit a record breaking 2.36 million visitors in 2016. The park’s popularity attracts tourists and locals to the Coram area and the distillery. The company’s collection starts with a simple ingredient, glacier water. Lee told GlacierHub that the company “found an old barn with a good well on a glacial aquifer with pure, cold water, and started distilling.” The glacier water is later transformed into a multitude of infused liquors such as Glacier County Honey and Flathead Lake Cherries.

Why use glacial water to make liquor? “Glacial water is considered to be purer, as it is frozen and then thawed, which removes some contaminants,” said Anthony Caporale, producer of “The Imbible: A Spirited History of Drinking,”a music and comedy show about the history and science of cocktails and spirits, in an interview with GlacierHub. “Water absolutely affects the taste of the liquor, as it makes up 60 percent of what’s in the bottle (the other 40 percent being ethyl alcohol). That’s why distillers are so crazy-protective of their water sources.”

But the question remains – how does one make whiskey with glacier water? Glacier Distilling relies on an old-school technique to distill their whiskey – fractional distillation. It’s a multi-step process where ethanol and water are separated due to the difference in boiling points, according to the company’s website.

The company starts by mashing and fermenting the grain by cooking 500 lbs. of grain in 200 gallons of water in a mash tank. Later on, the cooled mash is transported into a fermentation tank for about 3-7 days. This allows for the yeast to consume a majority of the sugar, making the mash into a 10-12 percent ABV, alcohol by volume, which is a standard measure of how much alcohol is in a given volume, “distiller’s beer” or “wash.”

Once the wash begins boiling, due to the difference in boiling points, alcohol (which boils at 173º F while water at 212º F) will start to boil out of the wash, followed by water.

When the alcohol and water vapors are transported to a copper column, they “reflux,” meaning the lighter alcohol vapors rise. Next, the light vapors transform into liquid in the water-cooled condenser.

As the distillate comes out of the still, it can either come out as a head, which has a powerful flavor, a heart, or a tail, which has a lower proof. The distillery collects the hearts, which they use for bottling or aging. Then, the spirit is aged in charred wood oak barrels, which gives it its signature flavor and amber color.

Lee, who welcomes challenges and seeks to promote his company, realized the need to sell inventory during the winter months when business is slow. Therefore, he decided to experiment with brandy. He used brandy that is produced from cherries near Flathead Lake and blended it with an aged bourbon to produce Fireweed Whiskey, which has become one of their most popular offerings.

When asked about the company’s future, Lee told GlacierHub, “Glacier Distilling will continue to distill our whiskey and add other products along the way as we run into interesting recipes and ingredients. We are looking to work with legislators to create a more reasonable and fair environment to operate and hope to be able to expand our tasting room operations.” Customers are able to purchase any Glacier Distilling product in state liquor stores, bars, and online. According to their customers, Glacier Distilling has a “super fun atmosphere, wonderful bartenders, and fantastic drinks!”, and their [house spirits] are “unlike anything they have ever tried.”

Glacier Distilling is not the only craft distillery to become a success. The expansion of craft distilleries across the United States has been steadily growing since 2010. According to the American Craft Spirits Association, in 2010, there were 560 Distilled Spirits Permits, federal permits legally required to operate a distillery, compared to 1,825 in 2016. What makes these craft distilleries different from big brand name companies is where their whiskey is made, the special ingredients the distilleries use, and the uniqueness of every batch.

Editor’s Note: This is an authorized reprint of an article first published over at GlacierHub. Author credit goes to Rosette Zarzar.