For most households, holiday cocktails are an integral part of the season. Whether it’s making the family Egg Nog recipe that’s been handed down for generations or a new spiked cider recipe you tried out for Friendsmas, booze is simply part of the fabric of celebration. Many of these are well-worn traditions that have spawned hundreds or thousands of variations.

Many craft bartenders like to put their own spin on these classics. Many times, drinks traditionally made in big batches like Egg Nog or Milk Punch are rejiggered to serve one instead of many. Others riff on these drinks to pull in flavor combinations that you probably won’t find in your family’s cookbook.

To ring in the holiday season, we’ve compiled some off-the-wall variations of classic holiday drinks. 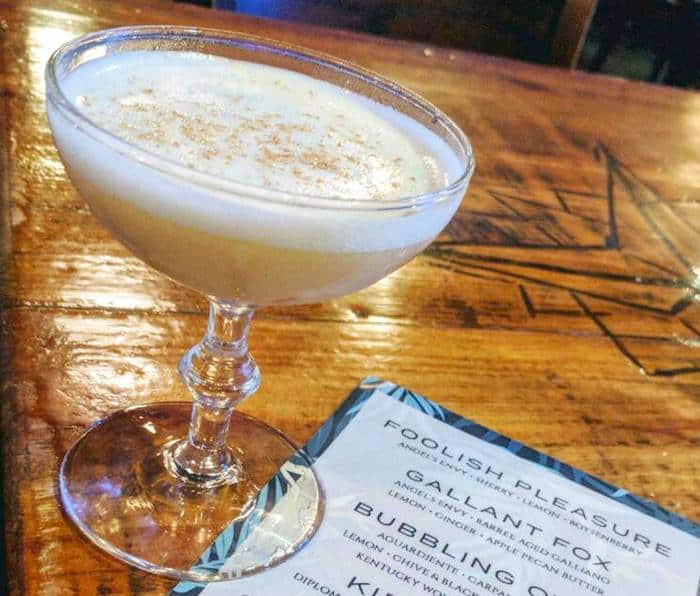 The general concept behind Nog is almost a millennium old, and contains eggs, cream, spices, and booze. It’s been adopted across cultures, typically reimagined with locally available ingredients. This take on Egg Nog was developed a few years ago for The Cocktail Virgin blog for a Mixology Monday challenge. “After uncovering a Christmas drink from Chicago’s Violet Hour called the Bird on the Wire, I gave thought to Leonard Cohen and was inspired by a line of that song “Like a drunk in a midnight choir” and made this Egg Nog after one of Cohen’s two favorite spirits (the other besides Scotch was Cognac),” says Yarm.

A Drunk In A Midnight Choir
Frederick Yarm, bartender at Our Fathers Deli and author of Boston Cocktails: Drink & Told, Boston, MA

Combine ingredients in a shaker tin. Shake vigorously without ice for 15-20 seconds. Add ice, and shake vigorously again. Strain into a rocks glass and garnish with freshly grated nutmeg.

Another festive eggy cocktail is John Sabbe’s Sweater Weather. This cocktail is halfway between a Rum Flip and Egg Nog, but incorporates the richness of traditional Nog with less traditional drink flavors like pecan.

If you’re looking for something a little more challenging, check out the Where The Buffalo Roam, a Californian take on winter flavors combined in one glass.

Shake. Strain over ice. Collins. Top with Anthem Cider or other. Garnish with a cherry.

*To make the shrub, chop up a raw kabocha squash (also known as a Japanese pumpkin). Add 2-3 cinnamon sticks. While preparing the squash, heat eight cups of  apple cider vinegar. When piping hot but not boiling, move the squash to a glass jar. Cover with vinegar, and seal the jar. Store in a cabinet or closet with no direct sunlight for 3 days, shaking occasionally. Fine strain the mixture into a pan and reduce, adding 2 cups brown sugar to start, and then more to taste if needed.

Drinking whiskey straight is a time-honored tradition, as is shooting it. To keep it simple this holiday season, take a whiskey shot followed by a gravy chaser.  Until I started researching this article, the concept was new to me, so I headed to my favorite neighborhood bar to test it out.

With Kentucky Gentleman, a sip of warm gravy immediately smothers the alcoholic burn on the finish. Following a sip of Buffalo Trace, a bit of the oak and char notes on the finish lingered. For science, I tried starting with a sip of gravy, then taking the shot, then drinking more gravy, but I would not repeat that – the flavor and texture of the resulting mixture was disgusting.

After having tried it a few ways, I’d suggest using a high proof rye or bourbon in this combination, since the gravy’s effect is most pronounced on a hot finish.

Pour whiskey and gravy into separate glasses. Drink the whiskey in one sip and follow with a sip of gravy.

When the snow is falling and the fire’s burning low, nothing is quite as satisfying as sipping a Hot Toddy. The drink’s roots are planted firmly in herbal medicine, where spices were believed to have healing benefits, citrus (a more modern addition) comes in with a vitamin C boost, sugar adds flavor, and booze helps to numb whatever ails you. This toddy combines flavors from the traditional Dutch speculoos cookies served during winter with bourbon and the traditional lemon and honey.

Read More Whiskey News
Column: On Legacies And Lawsuits, Who Was Really First, And The Rapid Bourbon Festival Sell-Out

Combine all ingredients in a stemmed wine glass and top with hot water. Garnish with a dehydrated lemon wheel seasoned with cinnamon and clove.

When you get to a certain age, you have to start creating your own traditions around the holidays. For Amor y Amargo’s Sother Teague, that means combining holiday flavors with turkey (get it?) in a riff on a Cosmo. I’ve been making this holiday riff on the Cosmopolitan for the past couple of years,” says Teague. “It’s got Turkey and cranberry sauce backed up by the baking spice notes of the bitters and when ornamented decoratively it looks like Christmas.”

Dry shake first five ingredients to kick start emulsion then shake vigorously with plenty of ice to break up the cranberry sauce (30-45 seconds). Double strain into a cocktail glass. Allow to settle for 45 seconds to form a stable head. Decorate with drops or stripes of bitters and a rosemary sprig.

45
Shares
563
Views
Share on FacebookShare on TwitterGet Our Newsletter
Get Jefferson's Ocean at ReserveBar. Shop now!