A Guide to Drinking Whisky in London

London is a gin town. There’s no denying that. The definitive category of the spirit is called London Dry Gin, after all. You’d therefore be in the wrong to ignore the innate appeal of the spirit in its spiritual home, a world filled with martini trolleys and gin bars. That doesn’t mean you have to forsake your favorite whiskies, though. In fact, there’s plenty of whisky to go around, especially when you know where to look. The good news is that we’ve done the hard work for you, so you can simply show up, hop out of your black cab, and get straight to the good stuff.

What better place to begin than the reigning number 1 bar in the world, the American Bar at The Savoy. It doesn’t take more than a minute inside its luxurious settings, live piano music filling your ears, warm hospitality around every corner, a welcome glass of bubbles in your hand, to realize the bar is deserving of such acclaim.

“It’s like a temple of bartending, everyone dreams to be working here if even for a short time,” says bartender Angelo Sparvoli. “Not everyone is lucky enough, though.” You’ll be lucky enough if Sparvoli is the barman during your visit, though.

Peruse the thematic storybook menu and consider starting with something such as the Rockefellers’ Reserve, made with prune-infused Woodford Reserve, bay leaf liqueur, port, grapefruit juice, and cardamom bitters. Or opt instead for The Shire Cocktail, with Chivas Regal 18 year old, raicilla, roasted sunflower honey, and cider. There’s plenty of other whisky to be found, with a good portion of the cocktail menu showcasing the water of life, not to mention a lineup of splurge-worthy cocktails including vintage spirits.

With a cocktail or two under your belt, you should have the inner strength to brave the nighttime madness that is Soho. Make your way to Swift, and head downstairs to the dimly lit whiskey bar and jazz lounge. You’ll find a lineup of roughly 300 whiskies to choose from, including a pleasantly diverse lineup of Japanese whisky and American offerings, in addition to all the Scotch. 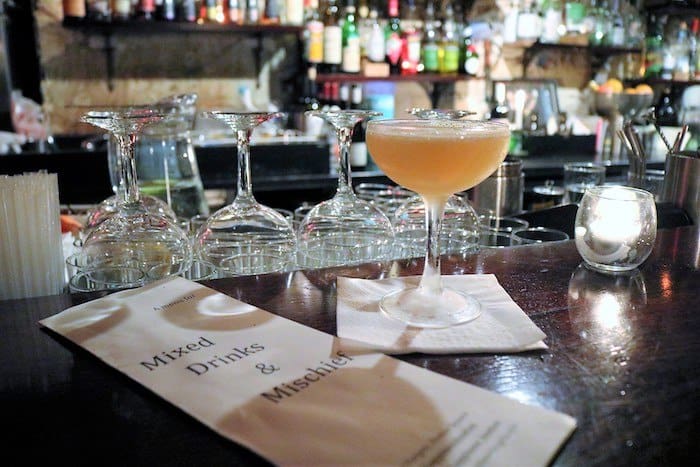 No London bar crawl would be complete without a trip to the Shoreditch neighborhood, either. A number of the city’s hottest bars call the area home, so you can plan an entire evening here. If you’re making just a single visit though, make it Happiness Forgets. The semi-hidden basement bar is a go-to locals hangout, which just happens to be internationally recognized for its well-made drinks and unpretentious service.

“We’re just a little happy neighborhood bar,” the barman tells me while serving the Two Doors Down, with Laphroaig 10, lemon, Pineau des Charentes, cane syrup, absinthe, and Flaggpunsch. There’s plenty more to try on the “Mixed Drinks & Mischief” menu, with four of the 12 drinks on a recent visit highlighting whiskey.

Eventually you may stop your bar crawling and call it a night, and maybe even go onto explore the city. If your wandering takes you as far as Hyde Park the next day then stop in for a refreshment at Stables Bar at the Milestone Hotel.

Senior bartender Angelo Lo Greco is your man with the plan there, and the drink to try is the house Milestone Old Fashioned. A choice of three house-finished spirits is available, including a blend of rums, tequila, or what you’ll obviously choose, whiskey, a two to one blend of Maker’s Mark and Johnnie Walker Black barrel-aged for three months.

“It’s one of our most popular cocktails” Lo Greco says. And you’ll see why when it’s prepared, with a show-stopping smoky presentation that promptly has everyone else in sight order one for themselves, too.

Find your way to the tube and head back across town to Oriole, a bar so innately fun and convivial that if you have anything but an excellent time, rest assured, the fault belongs solely to yourself. A menu of vintage global exploration awaits, allowing you to head to the New World to try the Everglade, with Bulleit Rye, Chartreuse, absinthe, mandarin, chocolate agrodolce and Amaro di Angostura, or The Orient, to sample the Nanjing Cooler, with Nikka Whisky From The Barrel, aloe vera wine, clarified watermelon juice, lemon, and osmanthus syrup. 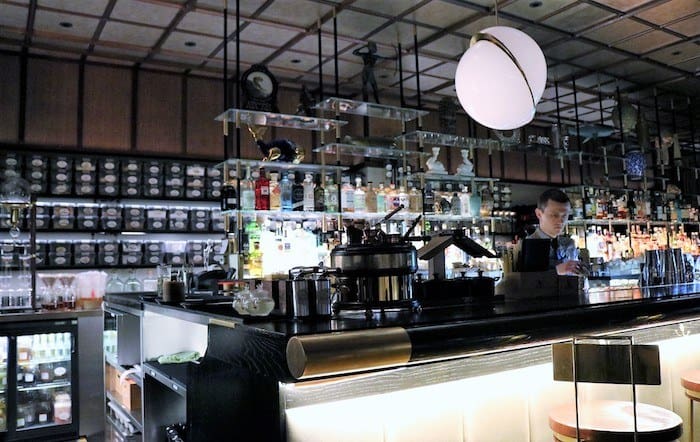 There are plenty of other whisky cocktails to choose from, entertaining performers, outlandish cocktail presentations, good food, and yea… it’s on you, chief, if you don’t leave a satisfied customer.

Call another black cab and head south of the Thames to Dandelyan, located in the Mondrian Hotel, home to Ryan Chetiyawardana’s wildly inventive cocktails. Each drink on the menu is placed on a graph of flavor profiles and times for enjoyment, and if you’re like me, it won’t be a surprise to find your top selections all huddled together on the chart (spoiler: they were all spirituous whiskey libations).

Try the Sweetheart Sazerac, with Jameson and Redbreast together with absinthe, dock leaf and nettle, a uniquely bright and fresh take on the classic. Or go for something such as the Koji Hardshake, one of the bar’s signatures, a whiskey sour riff with Dewars 12 year old, lemon, koji, cream sugar, and licorice bitters, topped with a toasted marshmallow spritzed with white truffle.

Back out in the daylight of the real world, if you’re in the mood to bring something home with you you’ll be pleased to know there’s no shortage of high-end shops in town. It’s hard to go wrong with iconic Berry Bros. & Rudd, and the store is now located at 63 Pall Mall, around the corner from its historic home. You’ll find plenty of their eponymous private cask bottlings, along with a massive overall selection and in-store tastings to keep you occupied.

You’ll also be conveniently close to Connaught Bar, a mandatory visit whether it’s gin or whisky that’s calling you. The martini trolley gets the attention, but take a look at that whiskey list loaded with the likes of Port Ellen 1982, Hibiki 30 year old, and Bowmore Bicentennial. If you didn’t plan on cashing out your IRA for this trip, then lust after those from afar and try a cocktail instead.

Go for the Burning Peat, featuring a mix of Chivas 18 year old and Lagavulin 16, with oleo saccharum, barley and osmanthus tea, and Palo Cortado sherry. It’s a deconstructed representation of the flavors of whiskey, thankfully also made with real whiskey, and topped with a “crunchy edible peat sponge,” a harmless if volcanic-looking blackened brioche. All served in a silver mug. Enjoy.

For a last but not least call on your whiskey crawl through London, consider a visit to the Scotch Malt Whisky Society. SMWS has two homes in London, the 19 Greville Street members club, and the new Kaleidoscope London. At the former, taste through what’s said to be the largest collection of single cask whiskies in the world, with over 300 available, and at the latter, expect a swanky new hangout open to both members and non-members.

The newest selections are presented in a detailed catalog with tasting notes and bottling details, while a larger listing of offerings for each location is available online and updated regularly. And just as SMWS bottles don’t give you distillery names, the menus don’t list prices, instead giving you a letter grade which corresponds to a price sheet per dram. Best come prepared with a game plan of what to try, and take a quick peek at that pricing guide before you get started.