What Fresh Whiskey Hell Is This?

On Monday, it was “The Death of the Brand Ambassador.” Today, it is “Revenge of the Global Partner,” reminding us that fanciful titles for paid celebrity spokesfolk are also a hot new thing. Just ask Wild Turkey Creative Director Matthew McConaughey.

McConaughey got his gig about a year ago. Kunis has been global partnering with Jim Beam since 2014. Today she recommends that we drink Jim Beam Vanilla, for when “you love the taste of bourbon but are sometimes looking for something a little different.” A mixture of vanilla liqueur with Kentucky Straight Bourbon Whiskey, it adds to the Jim Beam flavored portfolio that includes Jim Beam Apple, Jim Beam Kentucky Fire, Jim Beam Honey, and Red Stag by Jim Beam Black Cherry. 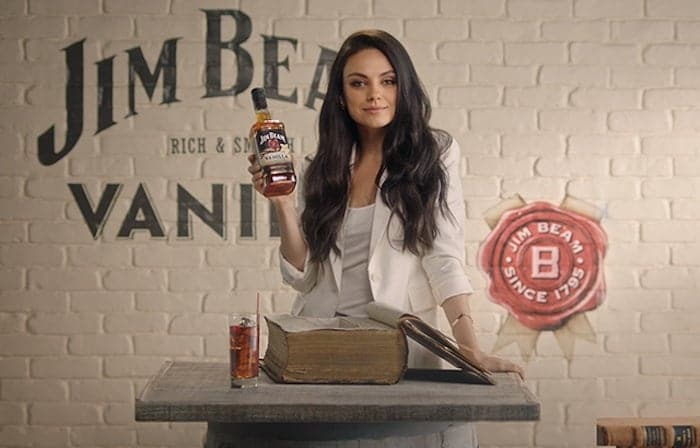 Neutral spirit costs a lot less to manufacture than whiskey. That makes flavored products more profitable and helps stretch currently tight whiskey stocks. Products classified as ‘specialties’ can also be sold at a lower proof, 70° (35% ABV) rather than the minimum of 80° (40% ABV) required for whiskey.

But to the typical consumer, it says Jack Daniel’s or Jim Beam on the label so it’s whiskey, right?

If you hate these products, blame Sazerac’s phenomenally successful Fireball, another whiskey/liqueur mixture.

When Jim Beam first got into the flavored whiskey game, they said it would never get as crazy as flavored vodka.

We’ll see about that.

Editor’s Note: This column is republished with the permission of its author.