When you are pairing bourbon and cigars, the best approach is to find what works for you and go with it. For me, that’s balance. Look for complementary flavors that enhance the overall experience rather than one predominant characteristic that dominates the whole experience. That’s why I like to pair my cigars with a flight of bourbons – that gives me a better opportunity to choose a good pairing from a broad range of mash bills, proofs, and other characteristics.

RomaCraft is best known for its Intemperance, CroMagnon, and Aquitaine cigars, but as with all popular boutique manufacturers, growth brings demand for special releases. Enter Leaf by Esteban, named after RomaCraft’s Master Blender, Esteban Disla. According to the RomaCraft website:

“When we met Esteban Disla in 2010, we knew we were working with one of the most talented men in Nicaragua. In truth, Esteban’s talent is matched only by his humility, his passion for tobacco and desire to mentor others.

Fabrica de Tabacos Nica Sueño was built, almost literally, one piece at a time. We began making CroMagnon cigars in Disla’s garage. Talented people from factories throughout Estelí came to help a friend realize his dream. We bought tobacco. We built rolling tables. We returned borrowed molds and presses when we bought our own

In  2011, when Esteban’s wife, Flor, advised that her shower could no longer be utilized to store bales of tobacco, we poured the foundation for our factory and bodega.”

Many brands, particularly in Nicaragua, have been built this way. Starting out in your garage and humidifying tobacco in your wife’s shower is not terribly uncommon.

This 6×52 cigar has an Ecuadorian Habano wrapper, Nicaraguan Jalapa Crillo and Crojo hybrid binder, and a Nicaraguan Jalapa Condega filler. Upon first light there are notes of cacao nibs, pepper spice, and cedar. The burn was even throughout the smoke, indicating good construction.

This is an extremely limited release cigar, so there’s not much information out there about it. I would say if you see it in your local tobacconist’s humidor, give it a try, because you might not get another chance any time soon. 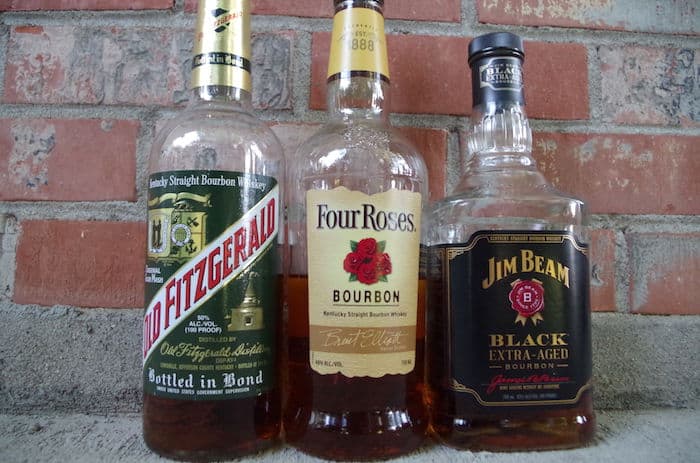 Together: Smoke brings out orange peel and citrus with spice in the bourbon, while the bourbon brings out cocoa in the smoke and mellows the pepper spice.

Together: Smoke brings out honey and apple in the bourbon, while the bourbon doesn’t do much to the smoke.

Together: Smoke brings out sweetness, baking spices, and apple in the bourbon (think: apple pie), while the bourbon highlights the cedar in the smoke.

It’s interesting whenever you get a combination that turns a wheated bourbon into a spice bomb, as happened with the Old Fitz in this case. Typically you think of the flavoring grains as being responsible for spiciness in a bourbon, but there is clearly another source – likely the barrel. I love Old Fitz Bonded by itself, so it’s always a surprise when it doesn’t pair well with a cigar.

The Jim Beam Black wasn’t a bad combination – what the smoke did to the bourbon was exceptional. But the bourbon didn’t do anything to enhance the experience of smoking the cigar, so I’m not sure this would be one I would recommend.

I’m starting to sound like a broken record here, but the Four Roses Yellow Label is the clear winner here. It hasn’t paired well with every single cigar I’ve ever put it up against, but it probably has a 90% success rate, and that’s significant. This pairing was very nice with each element enhancing the other beautifully.

Trying a flight of bourbons with your cigar gives you the opportunity to experience a depth of flavors you may not otherwise know exist.