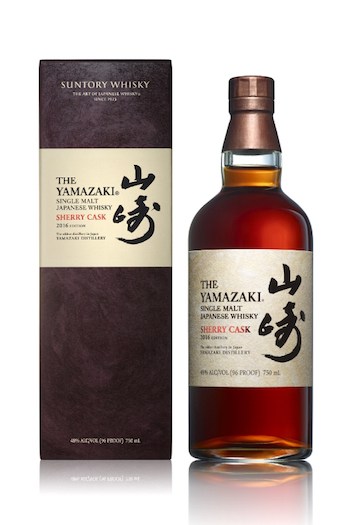 The sherry cask, long tied to the success of the Scotch whisky industry, has also had a strong role in the origins of Japanese whisky. It has been particularly important to the folks at Suntory. It was the first cask type they ever used (back in 1924), and it had such a high degree of success that the 2013 version of their Sherry Cask release was named top dog by noted whisky author Jim Murray the year prior to his controversial 2016 Crown Royal whisky of the year selection.

Now, with 2016 upon us, Suntory is pulling out all the stops with the Yamasaki Sherry Cask 2016 unveiling. Bottled at 48% ABV, this whisky is a non-age statement expression, though we do know “the same lot of whiskies” used for the 2013 release are the base. Aged for two additional years, Suntory also added “various rare sherry cask single malt whiskies, some of which are more than 25 years old.”

To get at the final taste profile as described at the end of this story, Suntory whisky blender Shinji Fukuyo went through quite the process, according to Suntory:

Fukuyo makes a point of visiting the Northern region of Spain himself. He does this to ensure that his selection of Spanish oak be sent to the “bodegas” (sherry wineries) to be made into the sherry casks used to store their Oloroso Sherry. Fukuyo carefully oversees this entire process, from the selection of the casks, to the charring and the aging of the sherry. After three years of aging, the sherry casks are sent back to Suntory’s Yamasaki distillery, ready to receive what becomes the distinguished Yamazaki Sherry Cask Whisky.

Fukuyo [later] selects only those casks in which the delicate balance of chemistry between the Yamazaki malt and sherry cask can be achieved, thereby enhancing Yamazaki’s characteristically rich and multifaceted flavor. The meticulous selection process of the Spanish oak, the management of the sherry casks, and the overall aging process ensure the final award winning quality of this liquid.

Yamazaki Sherry Cask 2016, should you want one of the 5,000 bottles, will set you back at least $300 when it releases at the beginning of February.