Located in the heart of the Capital’s old spirits industry, East London Liquor Company is an independent British distillery producing exceptional and innovative spirits. Originally a glue factory in Bow Wharf, East London Liquor Company found its home in the disused industrial space and repurposed the venue to create a custom-built distillery that produces and imports a range of small-batch spirits.

Their offering includes gins, vodka, rum and whisky; reviving and refreshing spirit production using techniques traditional  to the historic distilling area. Spearheading the boom in handcrafted spirits, East London Liquor Company is the first vodka, gin and whisky distillery to find its home in East London for 100 years and the only distillery to make whisky north of the Thames. 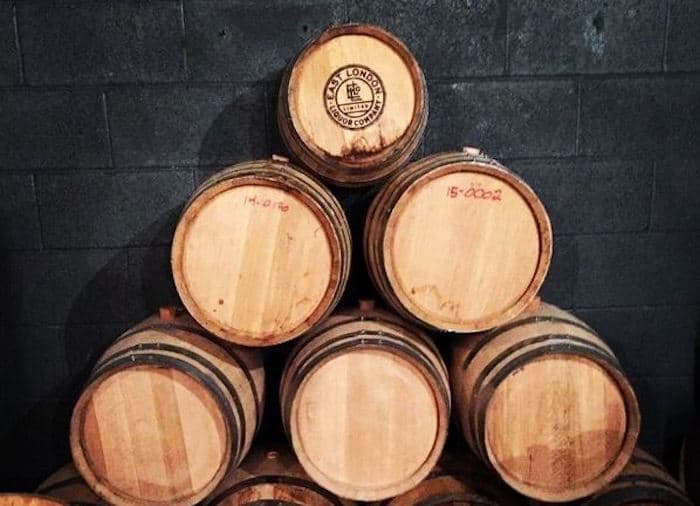 image via The Whisky Lady

I had the chance to visit the distillery a couple of weeks ago during a quick city break in London while on my way north to Cumbria, and was shown around the premises by Andrew Mooney, ELLC’s whisky distiller since 2014.

Although our Uber driver quite struggled to find their way to the distillery, we still had some time to chill out in the industrial-styled bar prior to our visit, sipping a flavoursome local G&T. And as much as a whisky drinker I may be, I still got a taste for the famous juniper-based spirit – even more while enjoyed in such a nice setting, with a charming (and intriguing) view over the stills [not running that day though :'(]

If you’re willing to discover the work behind a recently-built distillery, next time you find yourself in London, forget The Shard, London Bridge or your after-brunch walk in Green Park and go pay a visit to the chaps at East London Liquor Company. You’ll be welcome by an enthusiastic team and can even leave with a fashionable tote bag you definitely won’t find in Spittafields or Camden Town… Just saying.

First of all, could you please tell us a bit more about yourself : where do you come from, your background and current role at East London Liquor Company?

My name is Andy Mooney and I am originally from Ireland. I am 26 years old and I am from a small town called Drogheda in Co. Louth on the East Coast of Ireland.

How did I get into whisky? I am a qualified analytical chemist who got into brewing and distilling during a work placement while I was at college. I was initially placed at the brewery/distillery to work as a chemist doing Quality Control, but I was quickly drafted into the production side of things, for both brewing and distilling processes. I became extremely interested in whisky production as a result. I moved over to London in 2014 to work for ELLC as their whisky distiller, and I was given the opportunity of a lifetime: to help make one of the London’s first whiskies in over 100 years – who could possibly ask for more?

If you had to pick ONE expression from the ELLC range, which one would it be and why?

I’d say our whole range is pretty innovative: no one is producing spirits on our scale at our price point – that helps us stand out from the crowd. But if I had to choose one, I would say our whisky, because we’re not doing A whisky, but rather distilling various styles/finishes/maturation times, that helps keep us creative and experimental.

Could you please tell us what makes ELLC’s gin and whisky stand out from the crowd : raw ingredients, distillation process/equipment, maturation strategies?

We use exceptional botanicals to maximise flavour: for example, we use juniper berries from Macedonia because of their oily quality and intense, resinous flavour. We also always use fresh citrus peel, which we vapour-infuse, so that we can hit those bright, fresh notes.

We use beer wash produced by Crate Brewery, and we hope to start brewing our own wash on-site shortly, giving us more control with the raw ingredients.

We are doing a rye-style whisky, with the intent of doing a bourbon-style, malted, and other types of grain whisky.

We use Arnold Holstein hybrid stills, capable of producing multiple styles of whisky and giving us more freedom to play around/experiment with flavour profiles.

We are maturing our whisky in multiple types of barrels such as French oak, new American oak, ex-bourbon, ex-sherry, ex-Port, ex-rye and chestnut to name a few; different levels of charring/toasting and multiple sizes, to speed up and slow down maturation processes.

How much of a challenge has it been to set up a distillery from scratch in the heart of London?

Of course there have been lots of challenges to setting up a distillery in London – it’s no small thing, but it’s been a great journey. It’s actually really great to be so near to our accounts and customers – they can take the Underground over to Mile End station, and then walk down to visit us on their way to Victoria Park!

Are you currently conducting any “out-of-the-box” experiments at ELLC? Can we expect some uncommon releases in the future?

We’re currently launching a series of barrel-aged gins, which is exciting for us – every month we’re releasing our gin aged for various lengths of time in woods such as new French oak, ex-rye, ex-Bourbon, etc as part of our Barrel-Aged Gin Programme. It’s a nice bridge for our gin and whisky, so you can enjoy some fine barrel-aged spirits while you’re waiting for our whisky to be released around Christmas 2018.

Do you think English whisky as finally come of age and can now be described as a category in itself?

Whisky has been a tradition in England for years (for example, East London’s Lea Valley Distillery, which closed it’s doors at the beginning of the 20th century, produced whisky), but it’s not something anyone has really talked about, at least, not like Scotch or Irish variations. That gives English whisky a great space to breathe in: years of tradition without any limitations beyond EU regulations – it gives us a great space to experiment and have fun in.

How do you see the future for ELLC? Any projects in the pipeline? A crazy dram you’d like to achieve?

The Barrel-Aged Gin Programme is a good example of our goals to keep experimenting and having fun. Who knows what else, you will just have to wait and see. 🙂