The Oxford Artisan Distillery out of England recently launched a series of experimental whiskies called Grain Stories, with its first release being Heritage Corn Whisky.

Each expression in the new collection focuses on Oxford Master Distiller Chico Rosa’s research into different heritage grains combined with a variety of distilling and maturation processes. He said the Grain Stories name is also a metaphor of the creativity and experimentation planned for the bottlings, giving Oxford’s distilling team plenty of room for play.

“Every whisky we produce has its own narrative and with our exclusive use of heritage grain, the different varieties we use play a vital part,” Rosa said in a prepared statement. “It’s these distinctive grains which are the thread that binds every chapter of the Grain Stories.” 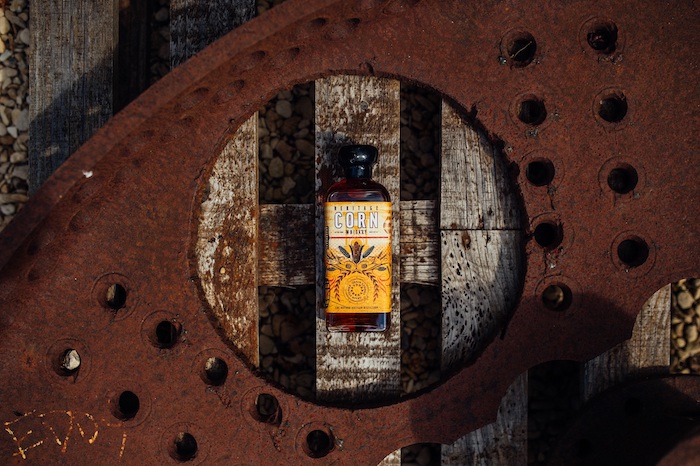 The distillery’s organic farming partners, led by Head of Grain & Sustainable Development John Letts, grow the heritage grains, some that haven’t been grown in England for centuries.

Exclusive in England to the Oxford Artisan Distillery, Letts explained that the grains were intimately sourced and bulked up over many years, and now grown sustainably using restorative, carbon-negative methods.

The Heritage Corn Whisky has a unique origin story, Letts explained. He grew up in Canada surrounded by fields of modern hybrid corn used to make products like corn flakes and high fructose syrup.

A few farmers grew multi colored corn (technically North Eastern ‘flint’ corn) that was once grown by native people all over North America. Some also grew a slightly sweeter corn … the ancestor of modern ‘sweet corn’ … which has a mutation that prevents the sugar initially stored in the seed from turning into starch as it ripens.

In 2010, Letts collected samples of both ‘flint’ and ‘sweet’ corn from gene banks all over the world and added this to seed he’d obtained from Canada. He planted all of it in a large research plot in his garden and allowed it to cross-pollinate for five years, which produced a genetically-diverse population with a large range of cobs with multicoloured seeds.

After every harvest, he selected the earliest ripening plants with the healthiest and most productive ears.

In 2017, Letts harvested about a ton of corn … by hand. Half of this was dry, but the other half was still damp and began to germinate (malt) on the barn floor as it was being cleaned. At first it appeared a disaster, Letts said, but turned into an opportunity.

“I flaked and crushed all of this maize and sent it to the distillery in a panic… and the team immediately put it in the distilling vat,” he said.

The grain ratio the team used was 51% corn (a mixture of ‘sweet’ and ‘flint’ corn seeds), half of which had germinated (malted) along with 34% rye, 10% wheat and 5% malted barley. Lactic maceration was undertaken prior to mash, and the corn was fermented dry as a paste after milling and before mixing with water and the other grains for three days.

The resulting liquid was matured in new American oak for three and a half years, imparting sweet vanilla, allspice and cinnamon notes.

Rosa explained that the second most abundant grain used in the Heritage Corn Whiskey is rye.

“Which is quite noticeable through its spicy character, but the corn is oily and its charm comes through with butter and biscuity notes that elevate the spirit,” he said. “The whisky is full of the distillery’s characteristic floral and herbal tones coupled with shortbread and unroasted nuts, while banana and ginger cake flavors interplay with the whisky’s smooth velvety mouthfeel, finishing with spicy and green grass vibes.”

Oxford Heritage Corn Whisky is bottled at 100.8 proof, and 830 bottles were produced. It’s priced at £95 for a 50cl bottle and is available exclusively from the distillery’s website.