Ten months after announcing his departure from Taiwan’s famed Kavalan Whisky, master blender and distiller Ian Chang revealed that he would be joining with the newly formed Karuizawa Distillers to launch Komoro Distillery in Japan.

Chang will continue his work as master blender and distiller for Komoro, while also taking on the role of vice president of the distillery, which is set to begin operations in spring of 2022. 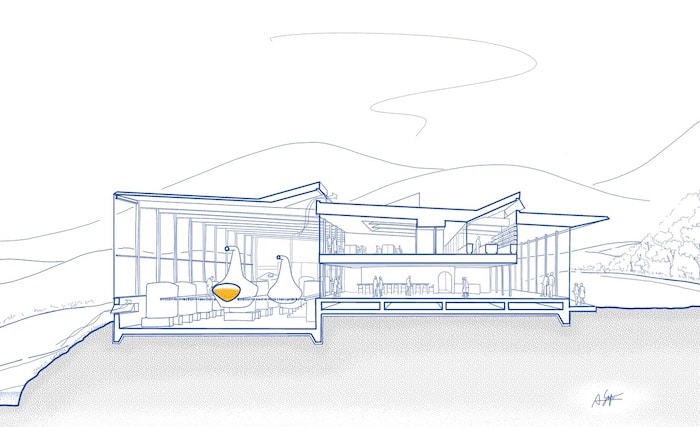 A sketch of the planned Komoro Distillery (image via Karuizawa Distillers)

“I am very excited to be able to continue my passion for whisky-making in such a well-respected whisky market as Japan,” Chang said, in a prepared statement. “My late mentor, of 12 years, Dr Jim Swan, always said that whisky-making is about the perfect fusion of the right people in the right place, at the right time. I know that with the incredible team we have in place, the abundant local natural resources, and the commitment from the local government, we can bring a brand-new chapter of world-class whisky-making back to the Karuizawa region.”

Komoro Distillery and its parent company Karuizawa Distillers are the brainchild of husband and wife team Koji and Yoshie Shimaoka. Koji, a CEO and co-founder of investment firm Quantum Leaps Capital Partners. The two have been living in the resort town of Karuizawa for over two decades and, during that time, helped rebuild a traditional Japanese inn there.

This latest venture is also a chance for the Shimaokas to pay tribute to Karuizawa Distillery, one of the smallest distilleries in Japan, which closed up shop in 2011 after 56 years of operation, and whose bottled whiskies have become some of the hottest items on the whisk(e)y collectibles market.

“Karuizawa whisky is a global symbol of the rich nature and history of our local area,” noted Koji Shimaoka. “I want to protect and honor this great name, whilst creating a new ‘legend’ in the place I have called home for more than 20 years. The Komoro Distillery aims to establish itself as a new benchmark in Japanese whisky.”

The wheels are already in motion for Komoro Distillery’s future, which will be situated just 5 miles from the original Karuizawa Distillery. The Shimaokas hired architect Akiri Sogo to design the building that will include the distillery, a visitor center, and a whisky academy to train the next generation of blenders and distillers. The building, which will be built at the base of Mount Asama, 910 meters above sea level, makes Kosomo the highest distillery in Japan. The construction is set to begin early this year, and when it opens production will be limited, “with the proposed annual production output just one tenth of that of Yamazaki.”

Chang is also mapping out the flavor profile for Komoro’s eventual releases, with plans to mature the whisky in Japanese Mizunara oak casks, as well as utilizing STR and sherry casks that are reminiscent of Kavalan.

45
Shares
2.1k
Views
Share on FacebookShare on TwitterGet Our Newsletter
Cheers to the Dads! Personalize a bottle of his favorite whiskey to create a modern gift for the modern man. Use code: FATHERSDAY20 for $20 off your next order of $100 or more at ReserveBar