Israel’s first whisky distillery, Tel Aviv-based M&H–short for Milk and Honey–has released a three-part series called Elements to follow up the unveiling of their first single malt earlier this year. The series comprises three variations on the distillery’s core single malt, each aged in a different selection of barrels.

Elements Sherry is matured mostly in oloroso and Pedro Ximenez sherry barrels from Jerez; it is reportedly the first single malt ever matured in Kosher sherry casks. According to a prepared statement from the distillery, the resulting whisky is characterized by “ fruity flavors, rich aromas, [and] a special deep but natural color.” 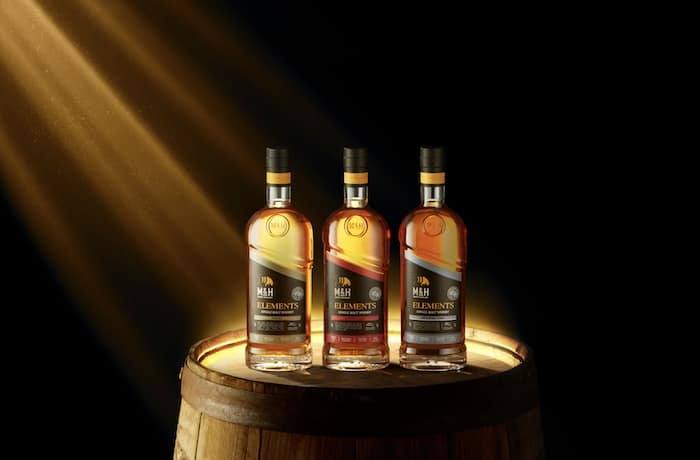 Elements Red Wine celebrates Israel’s millennia-long history of wine production and the “diverse climate and variety of soil types bring a spicy and original flavor to Israeli wine–and in turn, to the casks that The M&H Distillery uses for its Elements Red Wine edition.” This expression, which is aged in ex-Israeli wine barrels, is a floral single-malt with notes of dark chocolate.

Finally, Elements Peated was aged in Islay scotch barrels, resulting in a “delicate and lightly peated whisky” with “smoky aromas and salted flavors.”

Milk and Honey’s first expression launched back in 2016, on the heels of growing worldwide demand for single-malt whisky. As owner Gal Kalkshtein noted at the time, there aren’t actually enough drinkers in Israel to support sales, so most of what the distillery produces is shipped to the US. As the distiller’s website notes, whisky matures faster in hot climates than it does in chilly Scotland, something that producers from places like Texas and India have increasingly taken advantage of in recent years.

“I am very proud to see the Elements series outcome,” said Tomer Goren, head distiller. “It is all about the unique taste of each whisky, influenced by the different casks it matured in. Our goal was to create a series of well balanced and complex whiskies that will suit every palate.”