The Hibiki brand of Japanese whisky was first introduced to the market in 1989 by the company which would later become Beam Suntory. Seen as one of the most highly awarded blended whiskies from this part of the world, the variant of it known as Hibiki Japanese Harmony came forth in 2015. Now this bottling is getting a bit of a temporary facelift for the holidays in the form of artfully designed bottle and gift pack.

The specially created Hibiki Japanese Harmony 2018 Gift Pack, according to those behind it, is typical in what’s in the bottle for this expression, namely being a blend of malt and grain whiskies from the Beam Suntory distilleries of Yamazaki, Hakushu and Chita distilleries. As for the bottle itself, its design it said to be inspired by a traditional kimono pattern, and to this end is “embellished with the tabane-noshi, a traditional Japanese symbol of celebration that has often adorned precious gifts since ancient times. Several noshi are bundled together to make Hibiki Japanese Harmony’s tabane-noshi design, which is extremely auspicious and symbolizes shared happiness with others.” 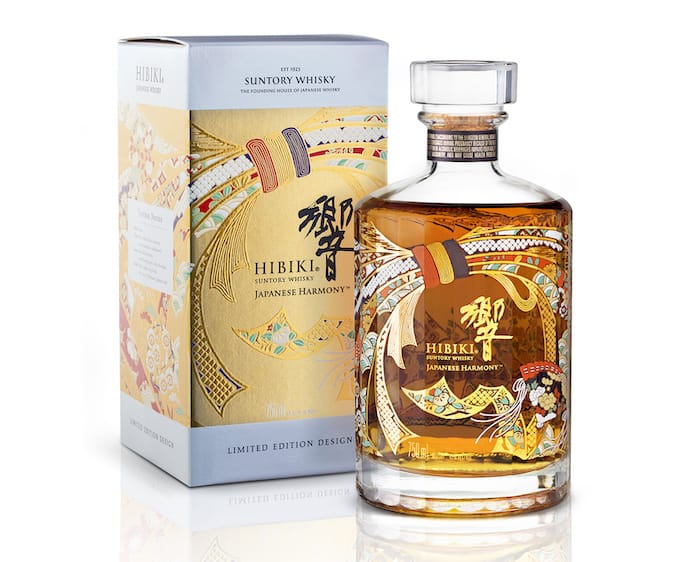 “Since the brand was first established, Hibiki has been a representation of Japanese art and design,” said Takahiro Itoga, Senior Global Brand Director at Beam Suntory, in a prepared statement. “This specially-designed bottle honors that spirit, utilizing traditional Japanese symbols to create a design representing both celebration and shared happiness. The bottle in and of itself is a work of art, making it the perfect gift for the holiday season.”

Plans call for this Harmony gift pack to be available starting in October for around $100 for a 43% ABV, 750 ml bottle. You’ll find some official tasting notes for this amber colored whisky below for your consideration.