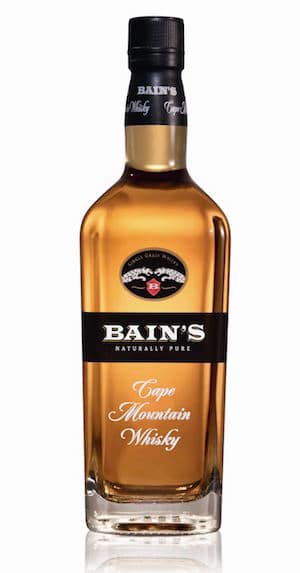 Pop quiz you whiskey aficionado – did you know whisky is produced in South Africa? It is a small industry in this former British colony and certainly not something even remotely close in scope or size compared to the likes of Scotland or the United States. Representatives of it have gotten some global recognition, however, and now one of the most well known of whiskies from there is set to make its American debut.

Bain’s Cape Mountain Whisky, a South African 100 percent grain whisky, is making itself known for the first time this month to those normally drinking bourbon by being made available at selected locations in Illinois, Minnesota and Missouri. It is produced by the 130 year old James Sedgwick Distillery, which is overseen by master distiller Andy Watts as only the sixth manager in this whisky operation’s long history.

This single grain whisky, according to those behind it, was named “World’s Best Grain Whisky” back in 2013 at the World Whiskies Awards. The base grain (South African Yellow Maize, or corn as we know it) is combined with “local waters that flow over 850-million-year-old sandstone and indigenous fynbos, the shrubland vegetation found in parts of South Africa’s Western Cape” and run through a double maturation process in which, after it first rests for

Bain’s, which is bottled at 43% ABV, is said to have “a warm and extended mouth-feel.” More detailed official tasting notes are below. Should you not be in one of the markets mentioned where this will be initially releasing, worry not, as plans call for a larger US rollout by fall.

“Bain’s Cape Mountain Whisky showcases South Africa’s ability to produce a premium, specialist whisky that reflects a unique taste of place, while holding up to award-winning, world-class standards,” said Lee-Anne van Wyk, Bain’s global marketing manager for Distell, Africa’s leading producer and marketer of spirits, fine wines, ciders and ready-to-drink products, in a statement. “This is a proudly South African whisky — created using only the finest South African grain and crafted with meticulous care by one of the world’s most-passionate whisky masters.  It is an elegant, lightly flavored, refined spirit that is overdue for the American consumer who appreciates a smooth, easy-drinking whisky and is interested in trying new things.”