Talisker makes the best single malt Scotch whisky on the Isle of Skye, and I will take issue with anyone who says otherwise. Seeing as they are the only operational distillery on Skye, one could just as easily make the argument that they produce the worst single malt on the island. I suppose I am choosing to see my Glencairn glass as half full, at least in this case.

The roots of Talisker stretch back to 1825, when Hugh MacAskill was granted a lease of Talisker House whereupon he and his brother, Kenneth, would establish a distillery five years later. The distillery in Carbost, Isle of Skye, quickly drew the affections of many, including Robert Louis Stevenson, who lovingly dropped the label’s name in his poem, “The Scotsman’s Return From Abroad.” Though successful as a label early on, the history of Talisker was not without its own setbacks. Perhaps most notably, a still fire destroyed the distillery in 1960. Rebuilding operations began quickly, including producing exact replicas of the original two wash stills and three spirit stills.

Today, Talisker is a part of Diageo’s Classic Malts Collection alongside such heavy-hitting labels as Lagavulin, Oban, and Cardhu. Their tagline is appropriate for a distillery representing the Island region of Scotch whisky: “Made by the sea.” Taken literally, the single malts from Skye are, of course, made in close proximity to the sea. Moreover, the character of the north Atlantic off the west coast of the Scottish mainland informs the final product. Briny and vibrant, Talisker’s moderately peated single malts make an impression as unique as their pedigree. 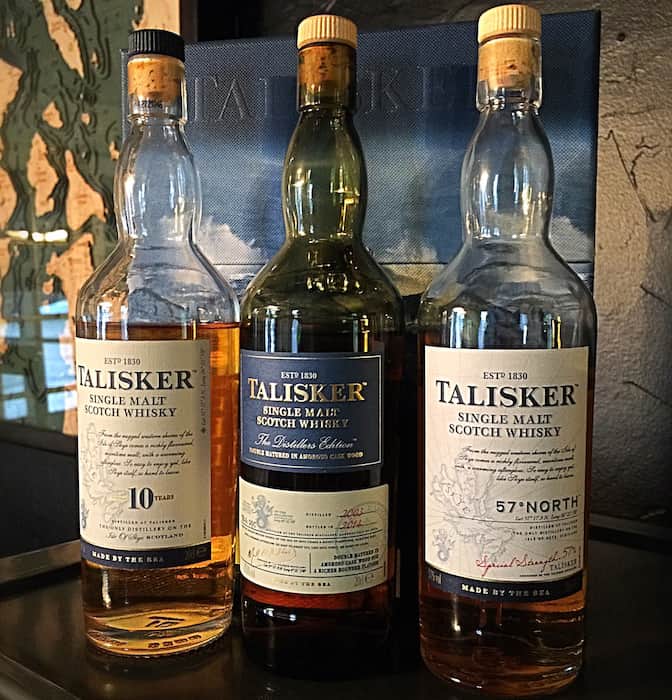 The flagship release from Talisker is their 10-year-old single malt. Talisker 10 is bottled at an endearingly quirky 45.8% ABV (91.6 proof).

Talisker 10 was one of those releases which just never left me after the first taste; I found myself craving its the distinctive flavor profile. In mixed company, the dram can be overpowered by more heavily peated single malts such as Laphroaig or Lagavulin. It would be a mistake to view the release as a lesser version of an Islay malt, however. Talisker has a unique identity which sets it apart as much as being the only distillery on Skye does. The price for a bottle is very reasonable, and paired with its quality, makes this release a must-have for my own collection.

The Distiller’s Edition from Talisker features additional maturation in ex-oloroso sherry casks. Though each annual limited release does not feature a overt age statement, the distillation and bottling years are clearly presented on the label. The Distiller’s Edition is bottled at the same 45.8% ABV (91.6 proof) as Talisker 10 Year.

I find many sherry-themed distiller’s editions to be hit-and-miss at best. For my money, Talisker makes just about the best use of intruding sherry to a standard single malt that can be hoped for. The additional richness and flavor does not simply mask the profile of the original spirit. Rather, the character of standard Talisker is enhanced and brought together in a cohesive and incredibly pleasing package. This is a distiller’s edition worth seeking out and enjoying.

Score: 92/100 [SHOP FOR A BOTTLE OF TALISKER DISTILLER’S EDITION]

57° North is perhaps amongst Talisker’s most appropriately named outings. Not only is the release bottled ay 57% alcohol by volume, but the Talisker distillery itself is located on the globe at 57° 17′ .9 N latitude. Talisker describes the bottling as a “Special Strength,” not to be confused with cask strength offerings.

Nose: Iodine right off the bat, nutmeg and cinnamon, less peat coming through than with Talisker 10 or DE, dried seaweed chips.

Palate: Sweet and fiery. Punchy. Fruity and salty throughout. Spicy ginger candy, black pepper, a flash of peat smoke, then more pepper. The finish explodes in a fireball — lowercase. Not like Fireball. Brine coats the mouth while the burn flashes intensely and is gone leaving pepper and peat behind. Mint very late on the finish.

One of my favorite characteristics of Talisker is how punchy it is, and 57° North comes out swinging. With this non-age-statement release, it is more than simply the higher alcohol content that is intriguing. I found the flavor profile to be a further enhanced and amplified take on the Talisker 10 model. While there are some subtleties that get steamrolled in the process, this is a single malt that is just simply a load of fun.

Uniqueness is an easy enough claim to fame in the spirit world. Being the first, the last, or the only of anything can be a marketing campaign in and of itself. Once the novelty wears off, however, the consumer is left only with the contents of the bottle. If Talisker were producing objectively bad Scotch then it would be an easy enough argument that perhaps whisky does not need to be distilled on Skye. It is my opinion, that is not the case, and not by a long shot. I find many releases from Talisker to not only be good, but to be exceptionally good. Clearly, this opinion includes the three reviewed here. With a price point below many labels in the Classic Malts collection and an identity all its own, Talisker is not a label to be missed.