Duty free stores the world over hold the occasional treasure just waiting to be unearthed by many a travel-weary whisky lover. The Macallan Whisky Maker’s Edition is a selection from the 1824 Collection Travel Retail series from single malt giant, The Macallan. Collectors may note there was a previous release of the Whisky Maker’s Edition offered as a part of the Fine Oak collection. Today’s Fine Oak lineup maintains a streamlined roster of 10-, 15-, 17-, 21-, and 30-year old single malts.

Additional 1824 Collection Travel Retail offerings include other non age statement whiskies Select Oak, Estate Reserve, Oscuro, and Limited Release MMXII. One almost feels the need to employ a travel agent just to navigate through the prolific catalogue that is The Macallan.

Official details regarding this particular edition of The Macallan are scarce at best. The alcohol by volume sits at 42.8% in the Whisky Maker’s Edition, reflecting the lowest standard proof (also known as Imperial Proof) at which Scotch whiskies could be offered for sale prior to today’s current standard of 40% ABV. The bottle provides no age statement, which is fairly common for special edition bottlings across the Scotch whisky world. 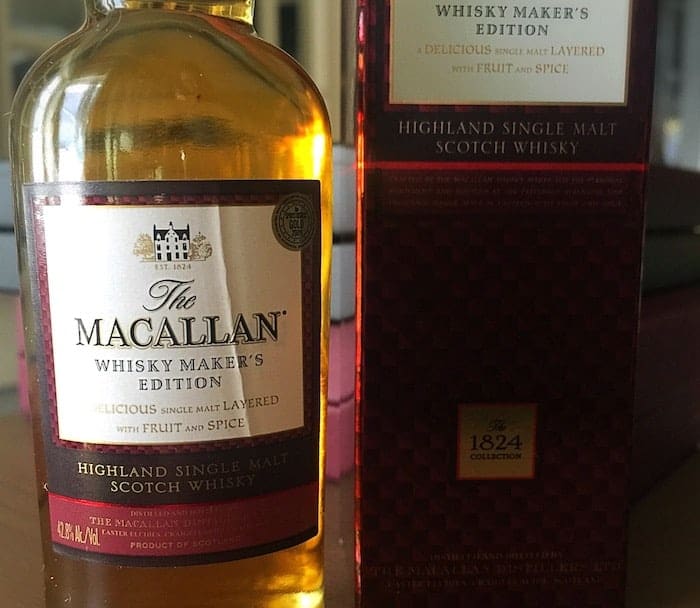 Nose: Alcohol up front. Subtle at first, but opens dramatically after a few minutes. Lime seltzer, baked apple, cinnamon, raspberry jam, almost no oak presence at all. Loads of dark fruit make up the body the nose.

Finish: Continued floral and spice notes late in the palate through the early finish. A late flash of a burn followed by a flood of sweet cream. Lacking in significant depth.

The Macallan offers a lineup that is robust in comparison to any virtually any other producer of single malts. Producing spirit in large numbers offers them the opportunity to showcase variations across their own spectrum in a unique way. Overall, this dram was unbalanced and a little disappointing in my personal experience.

Like many Macallans, it benefits from being given time to breathe and open up. With the Whisky Maker’s Edition, I can’t help but feel that there is a reason the bottle does better with a somewhat captive audience in travel retail.

Score: 79/100 [SHOP FOR A BOTTLE OF THE MACALLAN WHISKY MAKER’S EDITION]