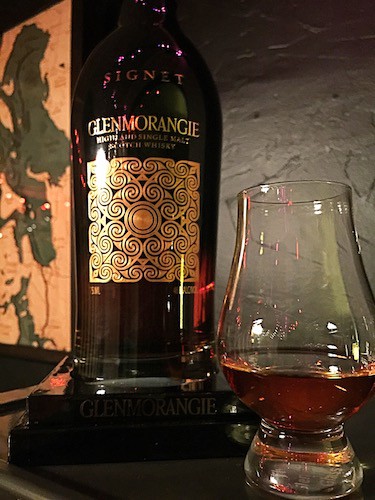 “Hello. What have we here?”

I could not help but channel Lando Calrissian when he first saw Princess Leia in The Empire Strikes Back as I was handed a bottle of Glenmorangie Signet as part of my most recent assignment. For those unfamiliar, The Empire Strikes Back is the second (and/or fifth) installment of the popular series of Star Wars films. Check them out. You may enjoy them. Anyhow, whisky.

Glenmorangie is a producer of Highland single malt Scotch whisky. This is nearly as obvious a statement as my recommendation that you watch The Empire Strikes Back, but it rings true. The distillery located in Tain, Rosshire, Scotland was formerly a brewery before conversion into a distillery in 1843 by William Matheson. In 1887, the Glenmorangie Distillery Co. officially took ownership.

After decades of success contributing to blends as well as small batch single malt bottlings, Glenmorangie began to strategically push their single malts in 1959. This is where the label established much of its more recognizable aspects that persist today. The Glenmorangie brand is overseen by parent company LVMH Moët Hennessy Louis Vuitton SE, which reads like an absurd luxury shopping list in itself.

The most commonly encountered offerings from Glenmorangie make up their Core Range of single malt Scotch whiskies. Included in this lineup are the 12-year-old Lasanta, which is finished in sherry casks; 12-year-old port cask finished Quinta Ruban; 12-year-old sauternes cask finished Nectar D’Or; and, of course, the 10-year-old Original. Stepping up from the Core Range sees us entering the Prestige Range. The opening act for this level of single malts is the excellent Glenmorangie 18 Year Old. Signet is the next stop upwards through the range, which carries on to a 25-year-old single malt, and then to the Pride 1981 and 1978 bottlings.

Glenmorangie Signet is itself named for the most recognizable symbol associated with the entire Glenmorangie range. The ornate square design (signet) adorning most bottles released by Glenmorangie originates from around the year 800 CE with the original carving of the Hilton of Cadboll Stone. Today’s Signet is a single malt which features no age statement, though the producers do state it is a blend of their oldest whisky, dating it back to “…over 30 years ago…” when it was far more common for distillers to malt their own barley in house. The use of roasted “chocolate” barley is an innovation for which this release in particular is noted, and it truly comes through in the final product. The whisky is aged in American white oak casks and bottled ay 46% alcohol by volume.

Appearance: Strong, oily legs clinging to the side of the glass. Noticeably darker in hue than some previous Glenmorangie releases. Dark almond and mahogany hues.

Nose: Soft and lightly floral (hibiscus) initially, soon opening up to release dark cocoa and spiced plum. The layers unfold slowly and intriguingly. One moment lemon meringue transitions into key lime before bread pudding followed by leather and tobacco leaves. Sweet, fruity, and finessed. No rough patches to be found whatsoever. I could spend quite some time with just the nose alone, and I have.

Palate: Full, round, and somewhat oily mouthfeel not unlike very well-crafted rum. To steal a word from the nose section: finessed. Absolutely classy presentation. Subtly sweet with notes of dark cocoa, tobacco, a hint of honey-roasted cashew at one point, orange zest, brown sugar, and a never-ending parade of baked goods with a variety of citrus icings. Again, no rough patches at all.

The transition into the finish is exquisite; there is a full-bodied burn that warms like the most stubborn coals of a dying bonfire while avoiding any hint of brassiness. The cocoa and tobacco bid a fond farewell before the sherry arrives very late to deliver a phenomenal and unexpected encore.

While I do my best to avoid gushing, sometimes the situation calls for it. Simply put; Signet is art in a glass. When it comes to discussing premium or luxury whiskies, the conversation is bound to include Johnnie Walker Blue Label and The Macallan 18. In my opinion, Signet bests both of these tried and true fan favorites in nearly every conceivable regard. It certainly does not hurt that it can generally be found for the lowest asking price of the three.

The long and short of it is that this whisky was created and presented to make an impression, and it excels at this. The look, the substantial feel of the bottle in the hand, the considerable weight of the stopper, the nose, the palate, the finish…it all adds up to a fully-formed and expertly-realized package which is worthy of the mystique it currently gathers.