Deanston Distillery sits on the shores of the River Teith near Stirling, Scotland, in the southern part of the Highlands. It’s one of those lesser-known Scottish distilleries that still retains an aura of mystery, although after tasting the Deanston 18-Year-Old Cognac Cask Finished Single Malt, I’m looking forward to getting to know it better.

Deanston is a relatively new Scottish distillery, but that doesn’t mean it’s lacking in history. Before it began producing whisky in 1966, Deanston was already nearing its 200th anniversary as a textile factory. The Deanston Textile Mill was a significant one, technologically advanced when it was constructed and commercially successful through much of its life. At one point, it was powered by the second-largest waterwheel in the world, a 36-foot diameter affair nicknamed “Hercules.”

Yet by the middle of the 20th century, the textile industry in Scotland was on the decline. So the facility was converted to produce another local product that demands a good, reliable water source: whisky.

Deanston Distillery is known for a relatively light, fruity whisky with “farmy” characteristics—think hay, honey, grain, and a slightly animalistic organic quality. It uses only Scottish-grown malt, and distills its spirit on four large pot stills equipped with boil balls (those round onion-shaped chambers between still body and neck) and upward-sloping lyne arms for higher rectification. None of the Deanston single malts are chill filtered.

Good spirits and fine textiles aren’t the only gifts the River Tieth has given to Deanston. It’s also the only distillery in Scotland that makes claim to being totally self-sufficient in terms of energy, thanks to the onsite hydroelectric plant that powers distillery operations.

There aren’t many official Deanston bottlings out and about, although it seems like that may be changing. Deanston is owned by Burn Stewart, the same group that owns Bunnahabhain and Tobermorey. For years, most of its product ended up in blends, namely Scottish Leader. However, Distill Group bought Burn Stewart in 2013, and since then, there’s been an increased emphasis on official single malt bottlings— which, judging by the flavor of this release, is a very good thing.

This particular bottling, Deanston 18-Year-Old Cognac Cask Finished Single Malt, was finished for six years in cognac barrels. It’s a limited edition, and while it’s still available from some online retailers, the distillery seems to have replaced it with a more recently released 18-year-old expression aged entirely in bourbon casks. 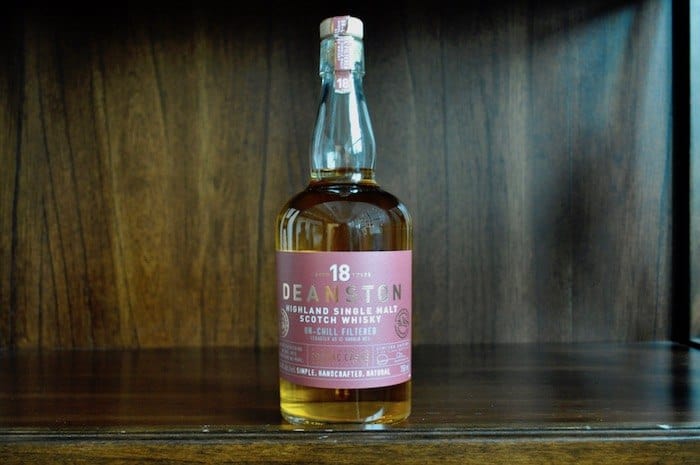 Nose: Quite sweet and honeyed, with warm notes of caramel, alfalfa, and navel orange. After a few minutes in the glass a floral, almost soapy note emerges.

Palate: This cognac-finished single malt is sweet and candy-like at first—think orange wedges and grape candy washed down with graham crackers, like after school snack. But it starts to show its age in the mid-palate: subtly integrated oak with a slight hint of wet wool.

And here’s where things get interesting. Superficially, Deanston is all sweetness and light, but just under the surface, there’s an element of jagged wildness – a hidden salinity, a tantalizing waft of struck match. Like a beauty mark on a model’s face, there’s something that prevents this from becoming cloying. A grippy finish starts with grape lollipops but dries out over time, ending on a nutty note. Richly textured and nicely proofed.

Friendly without being innocuous, nuanced without being challenging, this is a surprisingly...surprising whisky. I liked this quite a bit more than I expected to. It stands up to quiet contemplation, although the best setting I can think of for a bottle of Deanston 18-Year-Od Cognac Cask Finished Single Malt is a college reunion after party, say, or at the bachelor party of somebody you once knew well.

It’s fancy enough that it feel very special, but approachable enough that it won't alienate anybody whose tastes you're not familiar with. Recommended.