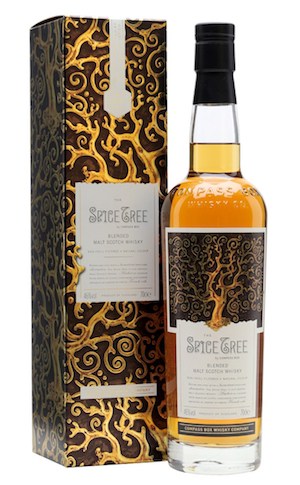 Some people just have to touch the stove. In the Scotch whisky world, I tend to love those who do so in the name of innovation. Compass Box certainly fits this bill, and this is the whisky that set them apart as a brand over a decade ago.

Compass Box The Spice Tree has a history that reads like a John Grisham novel at times. The company refers to its current version as the “Second Coming,” referencing its position in regards to the now-defunct and highly collectible first edition of The Spice Tree that was released in 2005. That original release was deemed too radical a departure from tradition by the Scotch Whisky Association (SWA), chiefly for the use of staves (gasp – the horror!) in the finishing process. By 2006, Compass Box was forced to cease production of The Spice Tree under threat of legal action on the part of the SWA.

In today’s version, The Spice Tree is a blended malt Scotch whisky, meaning it consists of individual single malts without any additional grain spirits in the blend. Specifically, The Spice Tree is created in the marriage of 20 percent Teaninich single malt, 20 percent Dailuaine, and a heaping helping of 60 percent Clynelish, a worthy and highly underrated single malt in its own right. The whiskies are vatted prior to additional maturation totaling an extra two years in what Compass Box refers to as “highly active hybrid barrels.”

A portion amounting to 25 percent of the blend is dedicated to vanilla toast casks. Twenty-two percent spends time in an infrared toast cask. Thirty-two percent of the blend spends the additional two years in a mocha toast cask, and the final 21 percent is aged in first fill standard American barrels in order to impart additional fruit notes. Sometimes the classics are classics for good reason.

It should be noted as well this review was conducted just prior to the announcement of the release of Spice Tree Extravaganza, a bottling put out on the 10th anniversary of the original being discontinued.

Nose: Malty sweetness, cereal grains, honey. A level of warmth in the nose.

Palate: Sweet, full, and round without a hint of heaviness. Nicely sweet like sea-salted caramel sauce, no doubt due to the influence of Clynelish. Two-thirds into the palate comes the full force of spice notes, just as advertised. Clove, warm cinnamon, wave on wave and layer upon layer of flavor.

Where Oak Cross is a fight for your attention all at once, Spice Tree feels takes its time to present its layers for your enjoyment. Long and sustained, yet gentle alcohol burn with continued clove notes through the finish.

I find myself wavering back and forth between which dram from the Compass Box stable I find more delightfully intriguing: Spice Tree or Hedonism. All the releases in their Signature Range are worth both the price of admission and the time invested to fully experience them, in my very humble opinion. In a glass of Spice Tree, I find twists and turns which do not fail to leave a bemused smile stretched across my face. We can get as clinical as we like when measuring the value of a dram, but that smile is what always tells me how I feel about a whisky long before my brain finds the words.

In terms of history, The Spice Tree is a fun chapter in Scotch whisky lore unfolding before us. With the mystique surrounding the label a decade ago, it can be easy to overhype this malt blend. As tradition collides with innovation, the results are often difficult to anticipate. In The Spice Tree’s case, however, the consumer is gifted a superior blend capable of competing with some of the absolute best in the industry. The story you’ll share over a dram is a nice bonus.

1
Shares
3.8k
Views
Share on FacebookShare on TwitterGet Our Newsletter
Get The Macallan® Rare Cask at ReserveBar. Shop now!