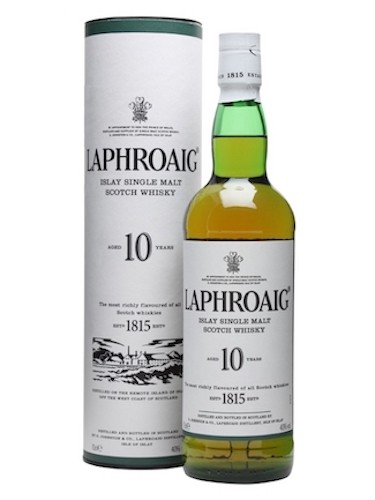 Laphroaig holds a special place in my heart for many reasons, but one reason in particular. When I was researching Scotch whisky last year, I spent some time on Islay interviewing and touring distilleries all over the island. Although all of the distilleries had something unique to offer to my research in addition to my personal experience, it was Laphroaig that changed the way I taste whisky today. As one of the only Scotch whisky distilleries that still malts their own barley, their malting floor was a key attraction at their facility. Once commonplace, traditional floor malting in-house is now scarce; only a handful of distilleries in Scotland still perform this step themselves (including Kilchoman and Bowmore on Islay, Highland Park in the Orkney Islands, Springbank in Campbeltown and The Balvenie and Benriach in Speyside).

Laphroaig was the first time I had seen an active malting floor—in addition to walking on the metal grated floor above their peat smoking kilns. Being able to be fully ensconced in all of the elements I had experienced when nosing and tasting this type of whisky in the past, but so viscerally, so completely, was an overwhelming and unforgettable moment. Moreover, the entire trip—in many ways—tastes like Laphroaig to me because of that moment. Laphroaig tastes like the bitter ocean air whipping me across the road as I walked the island at night; it tastes like the ocean beating against the black rocks at the shore; it tastes like morose Scottish winter. Laphroaig tastes like Islay.

Medium caramel in the glass, the Laphroaig 10 Year Old, which is their entry level Scotch, looks like any other whisky out there.

On the palate, the first impression is the interplay between sweet and salty. Malted barley and sea salt. Savory, with marked slate and driftwood notes. Match sticks, sulphur, hay, and smoked salt blend together with the ripe sugar elements that define the spirit. It is clear the play between very sweet oak and very smoky peat is what makes this spirit the seminal one that it is today

Sweeter on the palate than expected considering the heft peat brings to whisky, Laphroaig 10 Year leaves the impression of sea spray and hot breakfast cereal on the finish, fading into just the smoky peat we know it for.

Laphroaig 10 Year remains a beloved classic because of its ability to transport its audience to Islay, a remote and harsh place many will never travel to. It encapsulates much what the average peaty whisky drinker desires and expects. It offers simplicity and purity of expression from a place where there are many competing classics, and a few competing trendsetters.

Considering the company it keeps on Islay, Laphroaig certainly holds its own. This merits Laphroaig 10 Year a well-deserved score of 94. You can shop for a bottle of it online from a range of liquor retailers here.