What is a Lomond Still?

Most whiskey fans know the difference between a pot still and column still. The first consists of a big heated pot beneath a tapering neck to guide vapors up and over to a cooled condenser on the other side. The second is a tall, cylindrical column fitted with some number of plates to give the vapor more reflux on its path from mash to spirit. In Scotland, pot stills are used to make malt whisky, and column stills make grain whisky.

But there’s a third kind of still that was once used in Scotland: the Lomond still. In some ways, it’s a sibling to the hybrid stills used by many American craft distillers. It consists of a pot topped with a neck fitted with several plates, which could be turned on or off depending on the producer’s whim. 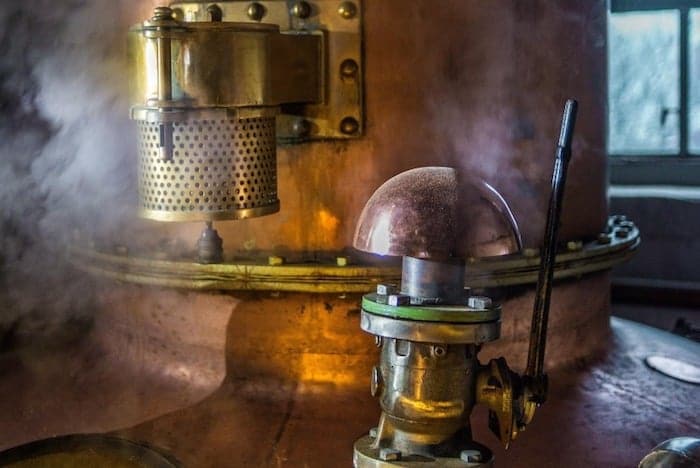 The Lomond still was developed by an engineer at Hiram Walker named Alistair Cunningham in 1955. At the time, Hiram Walker controlled several Scottish distilleries, and blended Scotch was extremely popular. The idea behind the new equipment was to allow distillers to make a range of whisky styles on a single piece of equipment, multiplying their opportunities to create different flavor profiles for blending. By choosing which plates to engage, producers could simulate a short-necked still, a long-necked still, or something in between, with varying levels of rectification within the column itself. You could even change the angle of the lyne arm, adding yet another variable.

For a brief period in the 1950s it seemed like the Lomond still might catch on. Hiram Walker installed others at Glenburgie, Miltonduff, and Inverleven, but eventually their use was discontinued. The only functioning Lomond stills in use today are at Scapa distillery, where they use one as a wash still (update: with the plates removed), and at Bruichladdich (update: where, as mentioned in the comments, it’s used to make The Botanist gin). Whiskies made on a Lomond still are now quite rare, so if you ever get the chance to taste one, don’t miss it.