The Tobermory distillery out of Scotland at one time had a popular 15 year old Scotch single malt whisky expression as part of its portfolio. It seems to have been gone for some years, as the brand recently debuted a new 23 year old done in the same aging cask style but with just more years under its belt.

The new Tobermory 23 Year Old, according to those behind it, is said to have spent its time resting in Oloroso sherry casks to create “an even more exquisite and full-flavoured whisky” compared to the original 15 year old. This particular offering looks to be joining the distillery’s core malt range. 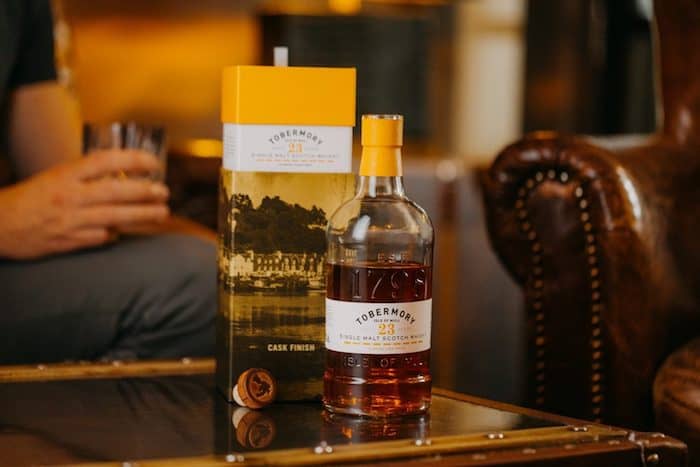 “Our team at the distillery have been working hard for many years on the return of this old friend,” said Julieann Fernandez, Master Blender at Tobermory Distillery, in a prepared statement, “and we’re incredibly proud to be introducing whisky drinkers around the world this exciting addition to the core range.

“Absence certainly makes the heart grow fonder and the extra years have been spent well, as our whisky has continued to mature into the new sherried expression. One of the finest expressions we’ve ever made, it’s an honour to introduce Tobermory 23 to markets in Europe, Asia and the UK.”

This Scotch is bottled at 46.3% ABV and is both of natural color and non-chill filtered. It prices around £320, or about $415 USD. You’ll find some official tasting notes for deep gold colored whisky below. As a side note, for those unfamiliar with this distillery, it  was established in 1798 and is the Isle of Mull’s only whisky distillery and one of the oldest commercial distilleries in Scotland.

27
Shares
3.2k
Views
Share on FacebookShare on TwitterGet Our Newsletter
Get The Macallan® Rare Cask at ReserveBar. Shop now!