Tobermory Distillery, one of the oldest distilleries in Scotland and the only whisky distillery on the Isle of Mull, is paying homage to its own storied history—and that of its island location—with the recent release of new entry into its Ledaig range: the Sinclair Series Rioja Cask Finish. The distiller’s first-ever non-aged statement has been made using heavily peated barley and matured in ex-bourbon casks before resting for 18 months in Spanish Rioja casks.

The choice of the latter casks are meant to hearken back to the tale of a galleon from a Spanish armada that sunk off the coast of Mull in the late 16th century. Some claim it was the San Juan de Sicilia, a troop vessel fleeing an English fleet; others say it was the Florencia, which was rumored to have been blown up in a dispute with local clans, taking with it hundreds of thousand of dollars worth of gold and other treasures. Whatever the case, it’s a wonderful legend baked deep into the heart of Mull’s history and that of Tobermory Distillery, which has been making single malt Scotch whisky on the island since 1798. 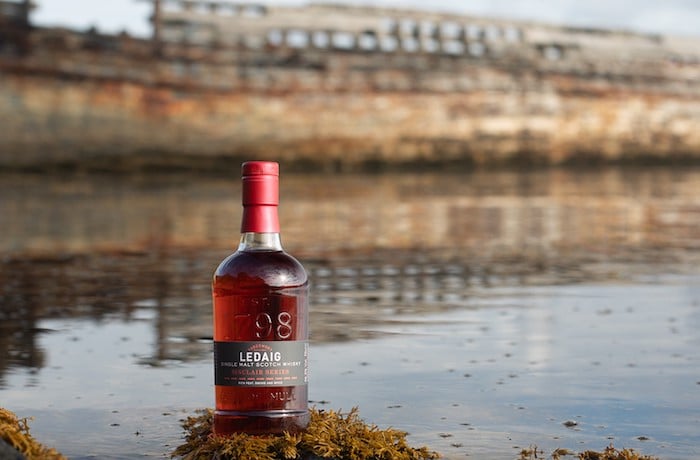 “Sitting alongside Ledaig 10 and 18-year-old, the Sinclair Series Rioja Cask Finish is inspired by Tobermory’s colourful past, nautical adventure and lost treasure,” Julieann Fernandez, Tobermory’s master blender, said in a prepared statement. “The smoky yet sweet expression is a fitting addition to the core Ledaig range, delivering the perfect marriage of peated flavours with fruity rioja sweetness and spice. Both of these expressions reflect the creativity and passion which we celebrate at Tobermory Distillery, crafting exceptional products which are an expression of the rich palate of our Hebridean home.”

The Rioja Cask Finish is also the first entry in Tobermory’s new Sinclair Series, a run of releases named after John Sinclair, a former kelp merchant who leased land on the Isle of Mull in 1797 and, within a year, had established a whisky distillery. Originally named Ledaig, for the land on which it was built, the distillery has seen its fortunes rise and fall over the past two centuries and was renamed after the island’s capital.

The 46.3% ABV Sinclair Series Rioja Cask Finish is available in various locations in the U.K. and Europe and retails for £36 (about $49 USD). Official tasting notes below.

94
Shares
2.5k
Views
Share on FacebookShare on TwitterGet Our Newsletter
Get The Glenlivet 18 Year Old at ReserveBar. Shop now!