The world of Scotch whisky is mostly segmented into a finite number of larger spirits companies that have ownership of a certain number of single malt distilleries and brands in their global portfolios. One of these players is Bacardi, known to many for the Dewar’s blended Scotch line. It is also under them, however, that five unique Scottish distilleries are owned.

In recent years Bacardi has been making a larger attempt at bringing into the public light these five distilleries, which include Aberfeldy (also the home of Dewar’s), Aultmore, Craigellachie, The Deveron and Royal Brackla. To learn a little more about the Bacardi whisky portfolio, we recently chatted with Bacardi Scotch brand ambassador Holly Seidewand about each. Note this interview has been edited for clarity and brevity. 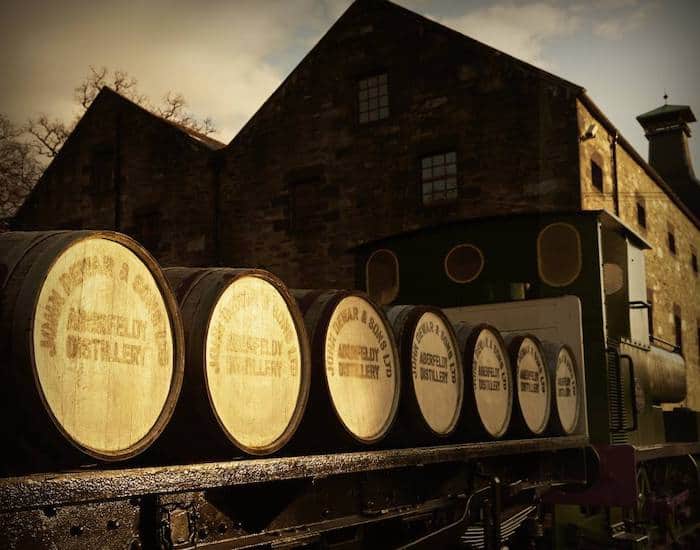 The Whiskey Wash (TWW): What is Bacardi’s focus with Scotch whisky? What kind of distilleries are in their portfolio?

We also have two Speyside single malt distilleries, and that is Craigellachie and Aultmore.

TWW: Let’s talk a little more specifics on each of them. Can you give an overview of the five?

Seidewand: Let’s start with Aberfeldy. This is actually the only distillery right now that is open to the public as well. This is our untreated highland malt, and this is what we call our “everyday IPA.” Our master blender Stephanie MacLeod wants this to be a very malt-forward spirit. We have long fermentations with Aberfeldy, which gives it that malty, fruity, sweeter quality up front as a new-make spirit. And then we age the full line in ex-bourbon and first and second fill Oloroso sherry casks. And what’s a little bit different about our whole portfolio is that these are not finishing times of different casks. The new make spirit comes up and off the still, and some of that goes exclusively into ex-bourbon, some into first fill Oloroso sherry and some into second fill Oloroso sherry. And those are all married back together.

At Aberfeldy, we have a 12-, a 16- and a 21-year-old in the core range. And these are going to be lots of honeyed, vanilla notes up front and then it has a lot of those dried fruit, baking spices from the sherry cask on the finish. The 16 [in particular] is a little bit unique. It’s aged in that same style that I mentioned before, but in the 16 we take all of those casks and marry them further for six months in first fill Oloroso sherry casks. So the 16 is much more fruit forward, especially on the nose.

Next, let’s talk about Craigellachie. It was founded in the 1890s by Peter Mackie and Alexander Edward. What you have here are some old-style techniques at Craigellachie that make its nose and palette unique compared to its neighbor distilleries in its region. We are the last distillery to burn oil underneath our malt, which gives it this kind of burnt viscous quality. Everyone gets from it a kind of burnt sugar, maybe burnt pineapple. Some people get it more pronounced as kind of an aggressive burnt matchstick quality. So just like how an Islay and other distilleries burn peat, when they’re drying and taking the moisture content out of the malt, we’ll actually burn this oil and we are the last distillery in Scotland to do that.

Craigellachie is also one of the last distilleries in Scotland that use worm tubs as condensers. [It is with these that] there’s very little copper contact [during distillation] so there’s a lot of those heavier, oilier, more aggressive tendencies to Craigellachie which doesn’t really make it fit in its region anymore. We’re in the family with the Springbanks and the Mortlachs, you know those types of distilleries where they tend to have heavier body to them because of these worm tubs and this process. [With this distillery] we have a 13, a 17, and a 23 [year old] and, just late last year, we released the 33 year old.

And then just down the road [from Craigellachie] you have Aultmore,  which is definitely our more delicate side of Speyside. It’s always been regarded as highly sought after by blenders because it has this very herbal, floral, citrus quality to it. In the Aultmore line we have a 12, an 18, a newly released 21 and, once in a while, you can still find a 25 year old. So that is the line of Aultmore.

Royal Brackla, [another one of our distilleries], is our drink divine whisky. Founded in the early 1800s, [it’s] one of the oldest distilleries in Scotland. It has definitely the tallest stills in our portfolio, [and] we have long fermentations at Royal Brackla as well. Royal Brackla is also definitely our more sherry forward whisky. Just like I had mentioned with Aberfeldy, we’re aging in those three types of casks. So the ex-bourbon, first and second fill Oloroso sherry casks all have their different ratios and percentages, but all to that same mindset of these three types.

Lastly, we have the Devron, which I kinda call it our “sleeper hit.” It was one of those 1960’s wave of distilleries when blended scotch was still booming and very popular and so they were opening some new single malt distilleries to feed into this demand. And so, MacDuff, or the Devron, as we call it, was opened up and it was kind of modern in its way, being one of the first distilleries with shell and tube condensers.

TWW: When we look at the different distilleries that you just talked about here in the Bacardi portfolio, you also had mentioned Dewars. Are those elements of Dewars and can you talk a little more about the Dewars brand in general?

Seidewand: I will say that these are components of Dewars, but there’s typically 30-40 single malts in a blend. Our master blender, Stephanie McLeod, doesn’t share percentages or anything like that. But obviously being a part of our portfolio, these are all brought into the family with the Dewars brand as well.