The Macallan recently revealed a new addition to The Archival Series. The new release Folio 6 celebrates the 1984 advertisement story of the then Chairman of the company, Allan Shiach.

An avid writer and advertising enthusiast, Shiach tasked his creative advisors with delivering a memorable campaign for the brand. This led to an iconic image depicting Shiach doing a sword-dance over a crossed brush and pen, symbols for his creative men, and appears to illustrate the gauntlet he had thrown down to them. The advertisement featured a headline which included the words, “ever keen to keep his Publicity Advisers on their toes,” ending with the strapline of: “The Macallan. The Malt.” 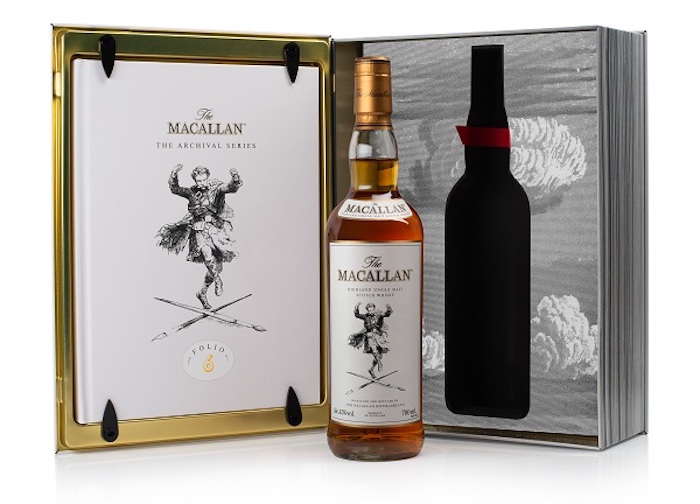 “Crafted to pay tribute to the playful sword-dancing Chairman advert of the 1980s, Folio 6 is a captivating single malt whisky which truly reflects the iconic status of the artwork it celebrates,” The Macallan Whisky Maker Polly Logan said in a prepared statement.

First released in 2015, The Archival Series was created to celebrate the brand’s print, press and film advertising campaigns of the 1970s, 1980s and 1990s. Through gathering the stories, anecdotes, drawings and photographs that featured as part of the campaigns, the series of individual releases have showcased how The Macallan grew from a remote farmstead on the River Spey to a well known whisky company.

With an ABV of 43%, The Macallan The Archival Series: Folio 6, as far as travel retail goes, is available from The Macallan Boutiques in Dubai DXB, London Heathrow and Taiwan Taoyuan airports from Q1 2021. The bottle is priced at £250 (around $345 USD) and comes accompanied by a special booklet commemorating the brand’s vintage advertising, presented in a book-shaped tin.