The Deveron Another Bacardi Whisky Getting New Muscle

John Dewar & Sons, continuing the march of Scotch whisky bottlings from some of the more obscure distilleries in its portfolio, is introducing to retail a range of releases from The Deveron. This operation, known as well as the Macduff distillery, is located in Scotland’s Speyside region. What’s coming to bottle from here includes 10-, 12- and 18-year-old expressions, all being marketed under the greater Last Great Malts of Scotland initiative. 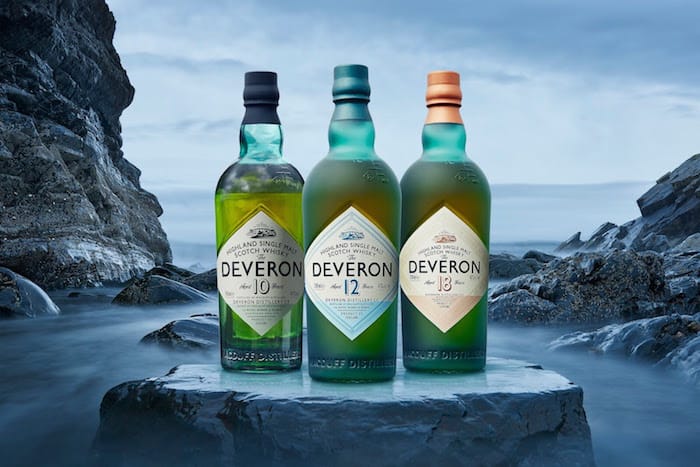 The Deveron 10 Year Old, 12 Year Old and 18 Year Old follow on the heels of the recent release of three aged single malts from another Dewar distillery, Royal Brackla. Being as Macduff is likely a bit obscure to most readers of The Whiskey Wash, I’ve included below from parent owner Bacardi some brief information on this whisky making outfit:

Located where the river meets the sea, Macduff distillery sits near the mouth of the River Deveron, shortly before its cool waters join the restless surge of the North Sea. Sheltered from the worst of the seaboard storms and winter winds, this tranquil spot has seen the creation of The Deveron malt whisky for many a decade.

A comparatively modern distillery – its spirit first began to flow in 1960 – Macduff was brought into being mainly for the purpose of supplying malt whisky to the blending industry. It was commissioned by a consortium of four businessmen, who called themselves Glen Deveron Distillers Ltd.

Emanating from five small copper pot stills, and unusual horizontal condensers that gently coax extra character from the spirit, The Deveron is an approachable dram which has a tang of coastal air about it. The distillery is set up for a light, fruity spirit that’s replete with apple tones and nutty notes.

As for pricing and where to get one of these whiskies, here is a summary of details on these three bottlings to take note of. All three will be available starting in October.

Limited official tasting notes for The Deveron whiskies, all of which were bottled at 40% ABV, are below for your consideration.

Down by the shoreline where spindrift flies, in taverns hoachin’ with coastal folk, liquid rites share this tasty trove of toffee, crisp apples and creamy oak.

When billows break and haar ghosts in, then haste ye home or some bit warm, unwind with toasted grain and apples, seaborne spice; calm from the storm.

Made where the big river meets the endless brine, in any weather, drookit or clear, delve in fruity depths where nutty notes are stowed; a dram for blether and fireside cheer.