One of the more popular offerings in the large portfolio of The Balvenie Scotch whisky line up are the Tun releases. Now the latest in this ongoing series, Tun 1509 Batch 8, has arrived in the United States.

The Balvenie Tun 1509 Batch 8, according to those behind it, takes 18 casks of whisky from the distillery that were hand selected by Malt Master David C. Stewart MBE and marries them in the Tun. This is “a large oak marrying vessel that sits proudly in Warehouse 24. The very process of knitting together liquids from a range of casks is a careful and complex art, but the rare technique of marrying the liquids in Tun 1509 provides the optimum environment for the whisky’s composite qualities to mix.

“The final liquid – a non-chill filtered whisky, left to marry for three months – is an expression of exemplary quality and unique character, greater than the sum of its constituent parts.” 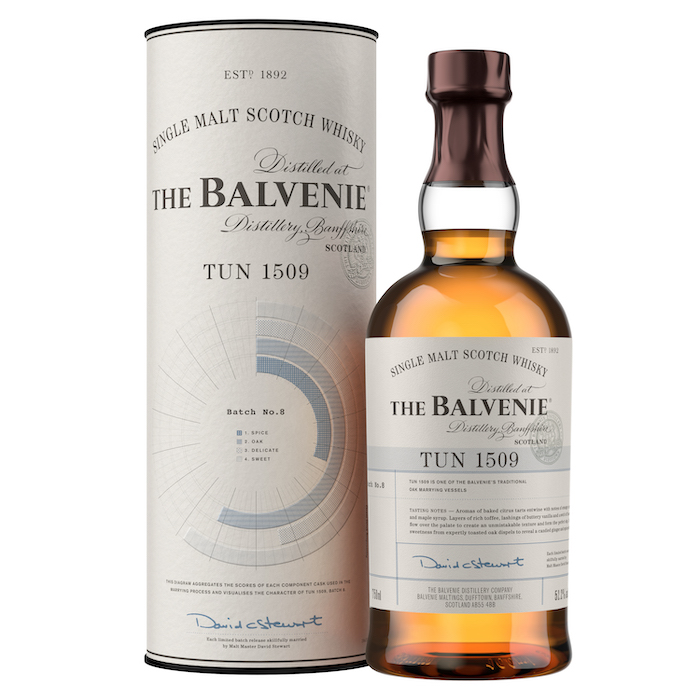 “The Tun 1509 series draws to its completion with Batch 8,” said Stewart in a prepared statement. “This Batch is a remarkable marriage of casks which result in a deep and rich Balvenie. To taste we have a rich toffee sweetness, buttery vanilla and a swirl of the house honey style – layering to candied ginger and aromatic spices.”

Each bottle of Tun 1509 Batch 8, the brand noted, comes with in-depth detail on the whisky, with a breakdown chart and visual representations of the flavor profile of each constituent cask and the overall character of the resulting single malt.

Tun 1509 Batch 8 is available in limited quantities now for $410. Official tasting notes are below.

The end result is a remarkably rich whisky, intense in flavour thanks to long maturation in ex bourbon barrels, second fill sherry butts, refill puncheons and new sherry butts. On the nose, there are sweet flavors of baked citrus tarts intertwined with aromas of orange marmalade and maple syrup. To taste, an unmistakable texture flows over the palate, offering a blend of rich toffee sweetness, buttery vanilla and a swirl of honey to form the perfect sip. The initial sweetness from perfectly toasted oak, disperses to reveal layers of candied ginger, a hint of cardamom & ground aromatic spices to create a remarkable drinking experience.