The Balvenie brand of Scotch whisky is one that long history to it, dating back to 1886 when it was founded by William Grant. It is a distillery that has a lot of stories to tell, particularly those of the craftspeople who’ve worked there over time producing high quality single malts. As part of telling their tales a new bottling series has been unveiled.

The new The Balvenie Stories range, according to those behind it, consists of three expressions that are each tied to a particular person at the distillery and their tale. The offerings are more thoroughly outlined at the end of this article, but in general they celebrate “Apprentice Malt Master Kelsey McKechnie using Kentucky Virgin oak to make a fruitier Balvenie, former distillery manager Ian Millar introducing smoke from Speyside peat [and] Malt Master David Stewart MBE using an unusually brittle barley.” How this is done is that audio conversations were recorded with each at the locations featured in each story, and this audio content, as well as guided audio whisky tastings of each expression, is available via an NFC-enabled neck tag that people connect to using their smartphones. 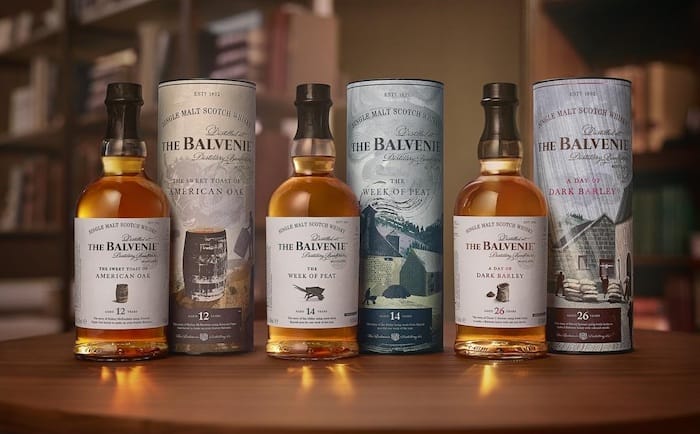 “Stories are the lifeblood of The Balvenie distillery,” said The Balvenie Malt Master David Stewart MBE, in a prepared statement. “They make up the fabric of who we are and what we do. The Balvenie Stories collection tells these tales in liquid form, giving whisky drinkers across the globe a special glimpse into the unique and very human nature of how we produce our whisky. Each expression in the collection reflects this by telling its own story via first-hand accounts and recollections of the many people involved.”

It is said the notion of story informs the design of The Balvenie Stories packaging too, with each tale represented visually on the whisky’s tube and label in bespoke illustrations from British artist and printmaker Andy Lovell. His work will be joined this fall by the launch of a book from the distillery called Pursuit – The Balvenie Stories Collection. It will contain a series of fiction and non-fiction short stories, by renowned writers from around the world.

The Scotches of the The Balvenie Stories collection are all at retail now, and, as stated before, you’ll find more information on each below.