The Royal Lochnagar Distillery was recently granted a Royal Warrant as Scotch Whisky Distillers By Appointment to Her Majesty The Queen.

The first cask filled at the distillery after the honor was awarded has gone on public display, bearing the Scottish Royal Arms against a Royal Lochnagar blue background. The art was hand painted by Thomas Oates, artist and son of a senior carriage restorer who’s family worked for generations at The Royal Mews at Buckingham Palace.

The Royal Warrant allows the Royal Lochnagar to display the Royal Arms on its Highlands Single Malt Scotch Whiskies and at the distillery in Scotland. It is a recognition of the regular supply of goods to the Royal Household. 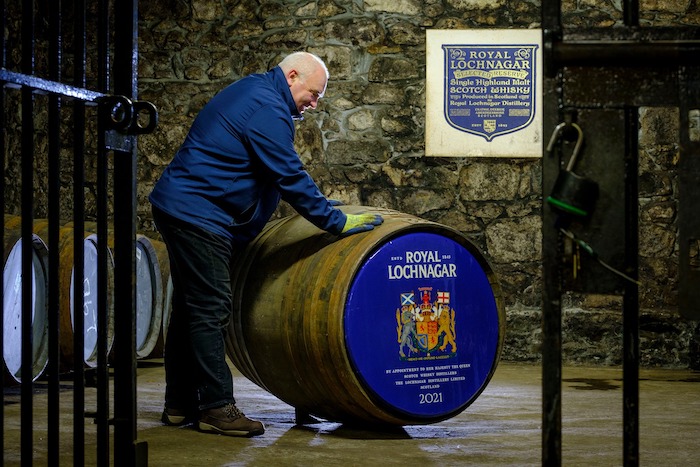 “Being granted a Royal Warrant is a great privilege for everyone associated with Royal Lochnagar,” Ewan Andrew, director of The Lochnagar Distillery Ltd, said in a prepared statement. “The distillery has a long association with the Royal Family and it is a source of great pride that we have become Scotch Whisky Distillers By Appointment to Her Majesty The Queen.”

The distillery now welcomes more than 20,000 visitors each year for tours and tastings. Sean Phillips, Royal Lochnagar Distillery manager, oversaw the filling of the first cask under the Royal Warrant.

“This is a very special day for all the team at Royal Lochnagar,” Phillips said. “Not only to be granted the Royal Warrant, but also to have the Scottish Royal Arms painted so beautifully on one of our casks by Thomas Oates, is an honour and privilege.”