The Ardnamurchan Distillery, opened in mid-2014, is said to be one of the most remote of the Scottish distilleries. It is located, according to the brand, “on the Ardnamurchan peninsula, a wonderfully secluded ‘finger’ of rocky land that stretches out to the furthest westerly point of the UK, just to the north of the Isle of Mull, and south of the Isle of Skye.” It is from here they recently launched their first single malt with a global audience in mind.

The new Ardnamurchan Single Malt AD:09.20:01, according to those behind it, was released earlier this month, crafted from a 50/50 split of peated and unpeated whiskies. The distillery is noted for producing “two signature styles of spirit” that correspond to the split just mentioned. Said expression is matured in a 65%/35% mixture of ex-bourbon and ex-sherry oak casks. 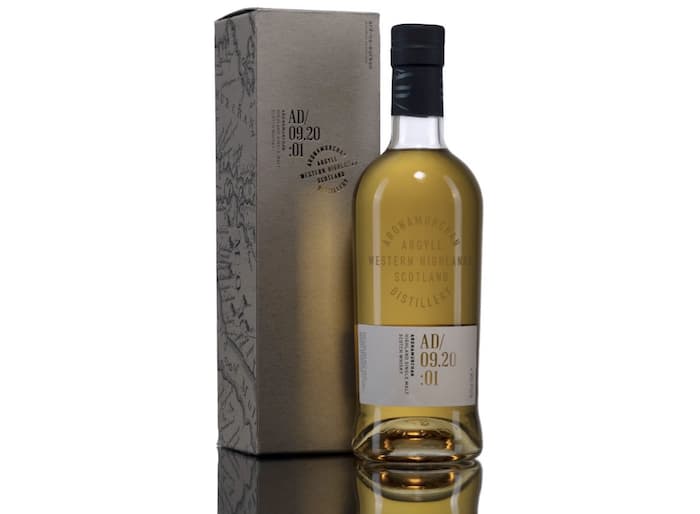 “When we filled the first spirit into casks, just over 6 years ago,” said Ardnamurchan Managing Director, Alex Bruce, in a prepared statement, “the concept of being able to disgorge those casks into bottles seemed very distant. However, we have had an incredible journey, building our 100% local team, filling the warehouses with over 10,000 casks and preparing national and international distribution.

“We relied on the unique local maturation climate to do the rest, and are really excited by the quality and consistency that has been reached.”

As it stands now this first single malt whisky release, bottled at 46.8% ABV and being both non-chill filtered and of natural color, is debuting in 25 global markets for a price of around £45, or close to $60 USD. Limited official tasting notes speak of “honeycomb, waxy peel, oyster shells, brine, strawberries with black pepper and bonfire embers.”

An interesting side note on this distillery is the fact that, according to the brand, “all the power and heat requirements for the Ardnamurchan Distillery come from local renewables – the river that provides the distillery’s cooling water has a hydro-electricity generator and the biomass boiler is fuelled by woodchip from local forestry – the overall footprint of the distillery is a light one.

“In addition, the by-products of the whisky-making process are recycled on the peninsula – the still energy-rich draff is combined with the pot ale to produce animal feed for use on the peninsula.”