Bonhams’ annual wine and spirits auction calendar kicks off 2022 with a bang this month, as its next whisky sale will see a 50-year-old Highland Park go for an estimated quarter of a million dollars.

The auction, set for Jan. 21st in Hong Kong, features 470 lots and spotlights a series of rare Scotch whiskies, led by an exclusive charity lot of a Highland Park 50 Year Old Single Malt Scotch Whisky, donated by Edrington Hong Kong in support of the environmental cause Green Power.

Released in 2020, this is the third 50-year-old created in the Orkney-based distillery’s 223-year history, with only 274 bottles ever produced. 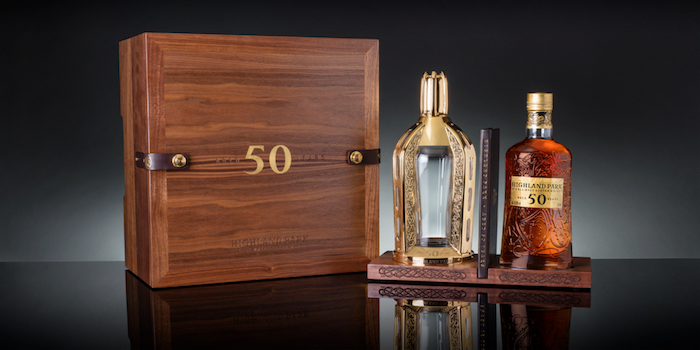 This was number ‘1’ and was produced using a traditional solera system – best known as a method of maturing Sherry – in which the contents were selected from nine refill casks, originally laid down in 1968, and married together in 2008.

It was then re-racked into a handful of the first-fill sherry seasoned oak casks. After a further 12 years of maturation, one of these limited casks was blended with a small quantity of the whisky from the last 50 Year Old released by the distillery.

Signed by Highland Park Master Whisky Maker Gordon Motion, the bottle comes in a hand-made wooden box, crafted from walnut by Scottish Master Craftsman John Galvin. The whisky is encased in an embossed glass bottle featuring a design inspired by the Norse heritage of Orkney – the home to the distillery – which dates back more than 1,200 years.

The sale proceeds will benefit Green Power, a Hong-Kong-based NGO dedicated to addressing diverse environment issues in a local context.

Bonhams’ director of wine and spirits in Asia, Daniel Lam, said in a prepared statement their newly-added January sale is a response to a robust and growing market. “Demand for whiskies, not only Japanese but also Scotch, remains strong and wide, and our January sale offers a wide selection of collectors’ favorites – all with attractive estimates.”

Further Scotch whisky highlights of the sale include:

For more information on this sale or to follow along with the bids, check out  https://www.bonhams.com/auctions/27715.