One of the things you have to say about the team behind the Johnnie Walker blended Scotch whisky portfolio, owned by spirits giant Diageo, is the fact they have an amazing amount of barrels to draw from to create a high number of yearly releases. Price points, rarity and themes are all considerations here, as we saw just yesterday in mentioning the latest Jane Walker offering. Up on deck around the same time as this one is a higher end expression known as Johnnie Walker Master’s Ruby Reserve.

The new Johnnie Walker Master’s Ruby Reserve, according to those behind it, was crafted to honor “Johnnie Walker Master Blender Jim Beveridge’s forty years of exceptional craft and dedication to whisky.” All the whiskies used to create it  are at least forty years old, with Beveridge and his team having “chosen whiskies from the ‘ghost’ distilleries of Cambus, Carsebridge, Pittyvaich and Port Ellen, all perfectly balanced with highly-aged expressions from Talisker, Royal Lochnagar, Glendullan and Cragganmore.”

“Every whisky that has gone into the creation of this new expression holds a special place in my heart,” said Beveridge in a prepared statement. “I worked at each of these distilleries during various points of my career and the flavours and smells of those whiskies transport me back to very happy times throughout my career at Johnnie Walker. 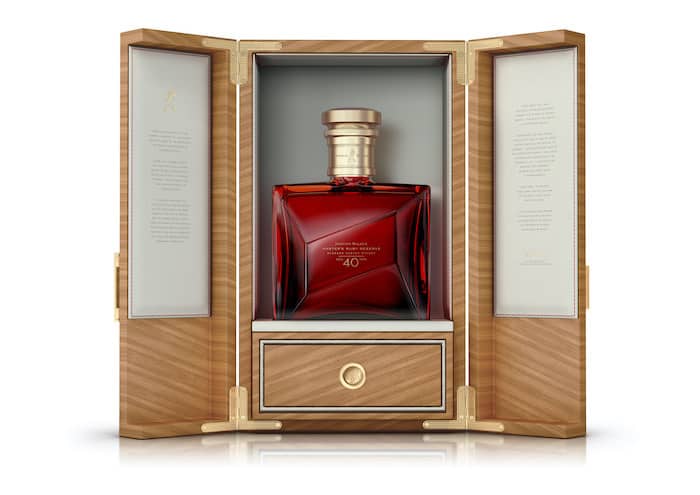 “The ‘ghost’ whiskies from Cambus, Carsebridge and Pittyvaich bring layers of rich fruit flavour. We’ve combined this with the flavours of dark chocolate, plums and cherries found in the wonderfully aged expressions of Royal Lochnagar, Glendullan and Cragganmore and the soft aromatic sea salt notes of Talisker and Port Ellen – creating a beautiful, full-bodied whisky.”

Given the high end nature of this, it is presented in a hand-crafted golden-red Baccarat crystal decanter. The color is said to be “a tribute to Jim’s ruby anniversary and a hallmark of Baccarat’s most exceptional pieces – is the embodiment of unique craftsmanship handed down from generation to generation since the mid-19th Century. Clear crystal is gradually fused with 24-carat gold powder at exactly 540°C to achieve the iconic golden red finish.”