Blended with ‘ghost whiskies’ from Scotch whisky distilleries that have long since closed and one-of-a-kind single malts, Johnnie Walker Blue Label Ghost & Rare Pittyvaich draws on rare casks from the legendary Speyside ‘ghost’ distillery of Pittyvaich, which closed its doors in 1993. 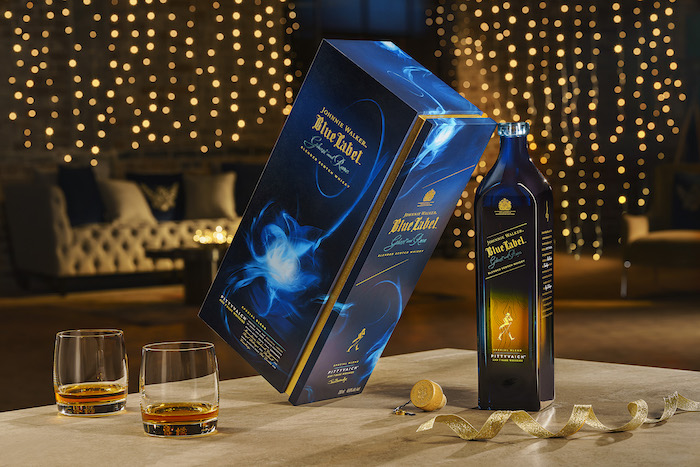 Beveridge said his team has long been fascinated by what’s described as the unique, unmistakable character “ghost” whiskies such as Pittyvaich bring to every drop of Johnnie Walker Blue Label. And alongside the distinctive autumnal character from Pittyvaich whiskies, Beveridge and the team hand-selected two other “ghost” whiskies from the distilleries of Port Dundas and Carsebridge.

He combined these with the rare Scotch from a quartet of Speyside distilleries including Mannochmore, Auchroisk, Cragganmore and Strathmill as well as the Highland whisky of Royal Lochnagar.

The distiller’s official tasting notes on this expression find sweet, fruit notes of fresh apple gather with the autumnal flavors of Pittyvaich, balanced with the subtle sweetness of honeycomb and soft wood from the “ghost” whiskies of Port Dundas and Carsebridge. The other rare whiskies bring aromas of dark fruit and berries before revealing butterscotch, stewing orchard fruits and a dash of cinnamon.

Available globally starting this month Johnnie Walker Blue Label Ghost & Rare Pittyvaich clocks in at 87.6 proof and comes in custom designed, individually numbered bottles with a map of Scotland showing each of the distilleries included in the whisky. It has a suggested retail price of $349.99.