Independent Scotch whisky bottler Gordon &MacPhail recently launched a series of four commemorative whiskies in celebration of their 125th anniversary. The second of these, having come to market last month, is a rare 1984 expression from Glenury Royal that takes the form of a 35-year-old bottling hat comes from the last cask of the make maturing in the Gordon & MacPhail’s warehouse.

Hailing from Stonehaven in the eastern Highlands,  Glenury Royal closed its doors for the final time in 1985 and was demolished after a 160 year old history. Founded in 1825 by Captain James Barclay, the suffix ‘Royal’ was added due to the owner’s friendship with King William IV. Gordon & MacPhail 1984 from Glenury Royal was laid down on Thursday, June 7th 1984 and has been fully matured in cask number 2335, a first-fill sherry butt. 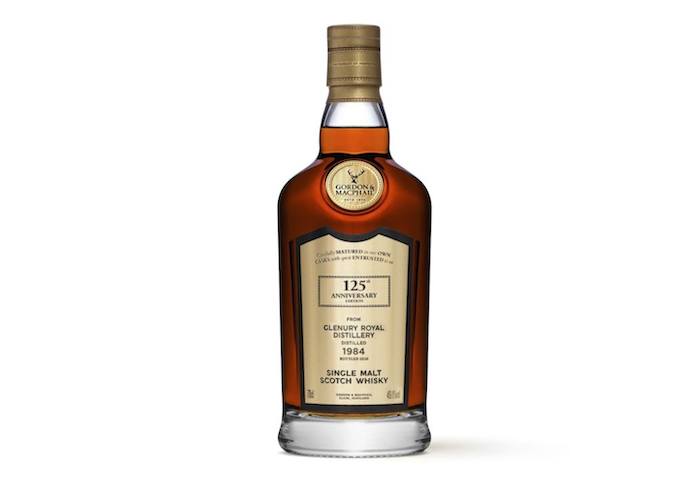 The rare whisky is bottled at 49.1% ABV, with official tasting notes that speak of a rich amber color and aromas of stewed fruit, cocoa powder, cinnamon, and toasted oak. To taste, the whisky provides sweet orange peel, cherry, burnt sugar and dried fig with a fruity finale balance with aniseed and sherry.

“Since 1895 Gordon & MacPhail has released single malts from over 100 distilleries, many of which are lesser-known or closed,” said Stephen Rankin, a fourth-generation member of Gordon & MacPhail’s owning family, in a prepared statement. “The anniversary series is a true homage to this endeavour.”

Gordan & MacPhail is a 125-year-old independent family-owned firm and malt whisky specialist. The company has gone through over four generations of family ownership and matched spirits from over 100 Scottish distilleries to its own casks.

With just 397 bottles available, Gordon & MacPhail 1984 from Glenury Royal will be available around $2,500. Prices in international markets may vary due to local taxes and import duties. Its release follows upon the heels of a 1972 Coleburn whisky launched in September.