Scotland’s Glengoyne distillery is said to be one of this region’s most beautiful whisky making facilities, nestled into Dumgoyne Hill and with the mountains of Loch Lomond in the distance. It is just 14 miles outside of the major Scottish city of Glasgow and owned by an independent, family distiller. They are now bringing to market a limited edition, 30 year old expression.

The new Glengoyne 30 Year Old, according to those behind it, spend three decades slumbering in hand-selected sherry oak casks which were resting in traditional dunnage warehouses. These casks, 13 in all, are made up of 33% first fill European oak sherry butts and 66% specially selected refill sherry butts. 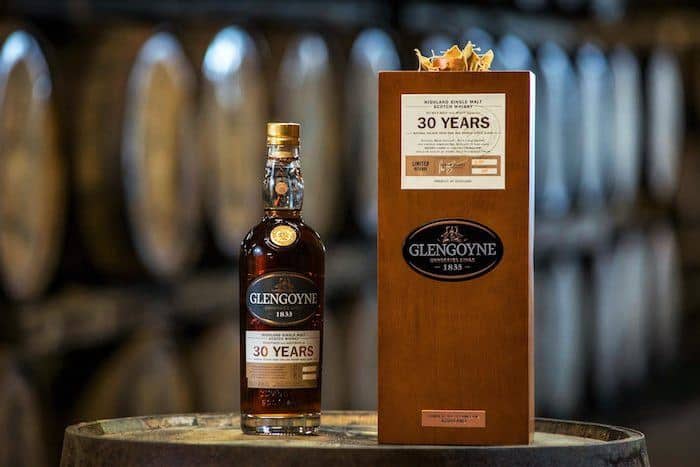 “The refill butts impart plenty of flavour and colour but do not dominate or overpower our spirit with too much oak,” said Robbie Hughes, Distillery Manager at Glengoyne Distillery, in a prepared statement. “They also tend to be fresher and fruitier, good for balancing the richness and weight of the sherry casks, adding pleasant top notes and complexity. In this instance, the task was finding the right mix of refill cask to best showcase the sherry exceptional oloroso sherry casks we spend six years sourcing, ensuring incredible colour and an exceptional flavour profile. ”

Plans call for just 6,000 bottles of this Scotch, non-chill filtered and bottled at 46.8% ABV, to be released globally each year. Each bottle is presented in a solid oak box that features “an oak and rose gold bung and a hessian square, the outer casing reflects the traditional cask sampling method employed by Glengoyne Distillery.”

You’ll find official tasting notes below for the Glengoyne 30 Year Old from the distillery. It is pricing at £600, or about $790 USD.

45
Shares
144
Views
Share on FacebookShare on TwitterGet Our Newsletter
Get The Macallan® Rare Cask at ReserveBar. Shop now!