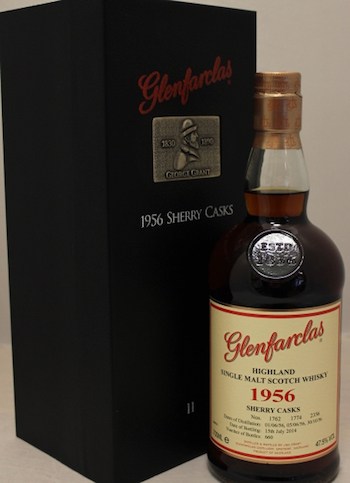 The independent Scottish distillery Glenfarclas is known for having some pretty old Scotch whisky casks (think 1950s) sitting around its aging warehouses waiting for the right moment to be bottled. That time to come of age happens now and again for them, such as with a 60 year old bottling released at the beginning of the year. Following upon the heels of this is yet another old timer ready for its moment in the sun, checking in as a stunning 58 year old matured in ex-sherry barrels.

The new Glenfarclas 1956 (!) Oloroso Sherry Cask bottling is drawn from a combination of two sherry hogshead casks and one sherry butt that all total produced just 660 bottles. The whisky, despite its age, still has a pretty healthy alcohol level at 95 proof and, according to the distillery, is non-chill filtered.

Though no price was immediate given for this Scotch, which will be available starting this fall, it is the second in a series of premium expressions celebrating each member of the family involved with running the distillery since the late 1800s. The first release, a 1966 Fino Cask, is pricing over a $1,000 still at various retailers.

The Glenfarclas 1956 Oloroso Sherry Cask, by the way, was bottled last year and is packaged in a similar way to the first one. It is “presented in a black leather box with a silver emblem featuring George Grant, second generation of the Grant family who lived during the time period of 1830-1890.”

“It’s a real pleasure to introduce the 1956 Oloroso Sherry Cask,” said the current George Grant of Glenfarclas in a statement, “considering that the casks we have from the 1950s are the oldest in our warehouses, we wanted to be sure to incorporate a small vatting of these treasured whiskies as part of this special family series.”

Read More Whiskey News
The Distillers One of One Auction Nets $4.1 Million For Charity