Get to Know Dr. Nick Savage, The Macallan’s Master Distiller

The Macallan Distillery is a study in contrasts.

When I visited in the fall of 2017, construction on its immense new 32-still distillery was nearing completion. The futuristic undulations of its green roof, a kind of rolling expanse of vibrant grass punctuated by almost animate-looking hillocks, were clearly visible from the leaded, crown molding-topped windows of the upstairs floor of the Easter Elchies house, Macallan’s painstakingly restored 19th century mansion.

Once the residence of Macallan’s site managers, today the Easter Elchies house is fitted out as a plush spot to host visiting VIPs, show off historic photographs, and make American whiskey writers feel like they’ve stepped directly into a Downton Abbey set. There, over coffee and cookies, I got the chance to ask Macallan’s master distiller, Dr. Nick Savage, about Macallan’s famous cask program, how he connects with consumers around the world, and how Macallan develops a new release.

The following interview has been edited for length and clarity. 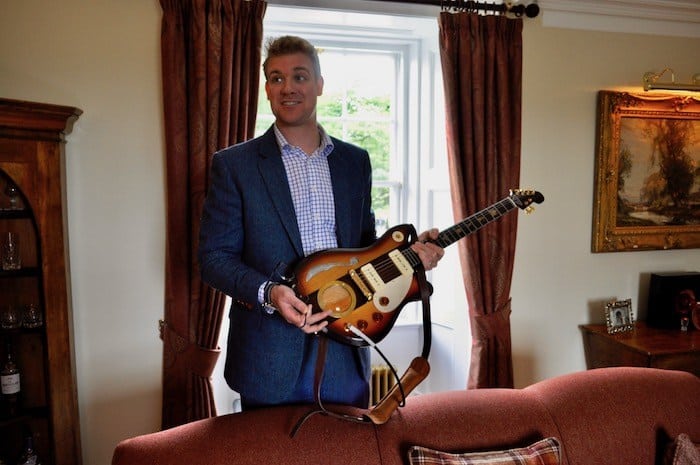 Dr. Nick Savage shows off a guitar made from casks used to age Macallan and inset with a dram of Macallan 12-year-old. Photo by Margarett Waterbury, image copyright The Whiskey Wash.

How did your career bring you to this role?

There are only so many of those jobs that come out every week or month. I was checking my emails on a Sunday, and this job posting from Diageo popped open that basically said, “Optimization of a whiskey cask.” My friends just said, “Well, you’ve got to try. Imagine the perks.” And that was it.

Diageo wanted someone to come in and look at whiskey casks from a timber-engineering point of view. We looked at losses. We looked at rejuvenation technology and making sure that you get the most out of the cask. We actually made some patterns for new cask designs as well. If you didn’t have all the constraints of today, how would you design a cask?

Then I got a phone call from William Grant in 2014, and I went to go work at Girvan. If you’re ever going to learn about brewing and distilling, Girvan is the place. I’ll always be learning, but you learn a hell of a lot there. Then, the phone rang again. It was Macallan, and they said, “Do you want to come and do this role?”

Well, first of all, it might sound cliché, but no two days are the same. I could be doing anything from evaluating new make spirit off the stills, to talking about efficiencies in the plant, to helping commissioning a new site. I work a lot with the finance and marketing guys too; are we utilizing every single drop in the most efficient way? How many new projects do we need over the next two or three years, and what are the stories behind them?

You never know what the even next hour might bring. Before I was up here I was reading a 60 page technical report. Obviously you’ve got to switch mindsets a lot, which can be difficult, but it is absolutely fun.

Macallan is a totally international brand. Do you use the same words to describe it to people from different cultures?

That is something we think about a lot. If we mention the word “peat” to someone in China, what does that mean? We have to try to work out how to describe whisky in a way that’s not necessarily diluted, but more universal.

The industry flavor wheel is very good when I sit here describing it for you, but I’m not in the supermarket, where people have got to be able to do it for themselves. So it’s a matter of making it more accessible in terms of language, as well as culturally diverse.

We’ve got to work out a way to make our world less complex to a certain extent, without losing the finesse of what it actually is. The guys in coffee have really got it nailed. Colors. That’s all it is. I don’t have to know anything about coffee, but I can navigate the Nespresso maker – light, dark, I like quite an intense coffee, so I’ll choose this. If we can do that, then we’ll win a gold watch and we’ll all go home.

Why do you think people love Macallan so much?

For me, Macallan is all about big, bold flavors. I might say Fine Oak is light, but it’s more that it has light style characters. So, citrus is a light character, a refreshing character. Vanilla is a light character. But it’s a Scotch. It’s still very intense. And that’s what you get with Macallan. You know you’re going to get an experience, and you know it’s going to be a quality experience. A big part of that is casks. Our cask cost is double our malt cost, which is the inverse of most other distilleries; most other distilleries say malt is the key.

Why spend so much on casks? What does it mean to be a “quality cask?”

The lengths that we go to make sure those casks are as we want are just unbelievable. We work very closely with all the supply chain all the way back. We buy the casks probably two, three years before we actually even get them. We’re going all the way back to the forest to a certain extent to make sure that if we want European oak, we get European oak, and if we want American sherry, we get American Sherry.

When we go and look at casks, we’re looking at construction. We’re also looking at the transport conditions. Has it sat in a container for too long and dried out? We don’t want that. Then we look at the wood type. You’ve got your European oak, your American oak that’s sherry seasoned, and your American bourbon. We’re making sure we’re getting the right oak origin; we’ve even got technology that’s scanning casks before we get them.

We also monitor the kind of sherry, the toasting time, and the temperature. And if we get all that right, plus the new make spirit on the back end, then we’ve got it. It’s always going to be organic and natural so you’re going to get variation, and that’s where the skill is. You can do a hell of a lot more if you’ve got control. That’s the mindset.

How do you develop a new release?

We think short-term, medium-term, and long term. Short-term, maybe it’s “We need some new products and we want to reinvigorate global travel retail, because it’s taking off.” So we start to think about markets. Maybe we’re seeing growth in Taiwan. All right, well, who’s the Taiwan drinker? Let’s get something in the pipeline for them for the next four years.

Then, in the medium term, what are the trends? You’ve got millennials coming in, and you’ve got vodka drinkers who are going to want to move to whisky. We’re constantly looking at trends in the that medium range to think, “Where should we move things? Where are the opportunities?”

And then you’ve got long term, where you’re not really thinking projects; you’re thinking treasure chest. It won’t be me who makes this whisky fifteen, twenty years from now. It will be whoever sits in this chair. I want them to open the warehouse and go “Oooh, look at all that interesting stuff that they left. Thank God they left that. Otherwise, we wouldn’t have had anything to play with.” You’re just a part of the brand and you’re just a part of the distillery. It’s important that you don’t take it all today. You’ve got to give them something for the future.

When you evaluate Macallan new make, what are you looking for?

We’re looking for a very robust style. It’s very cereally, biscuity, malty, but laid on top of fruitiness. It’s almost like a pear drop. It’s quite sweet, especially for 63.5%.

One thing about Macallan is when you have a nip, you don’t need much. It’ll stick in your mouth, to the roof of your palate and to the back of your tongue. And it’ll stay there for five to ten minutes. It won’t disappear. You’re still experiencing it. And that’s thanks to the new make. We’re looking for that viscosity, because if we don’t have that and then we put it into these big, heavy, active casks, they’ll just crush it. It’ll just taste like wood.

You’re in the middle of a huge expansion. There are all sorts of legends about distillers going to great lengths to ensure their new stills are exactly like their old ones, down to hitting them with a hammer to make a dent in the same place. How are you ensuring continuity in the new facility?

What we’ve been doing is fingerprinting what we currently do. We’re measuring and tracking everything, down to how many grains go into a mash. We’ve tracked all that data and seen how it moves over a year or two, so we’ve got a baseline for comparison.

Then, when we turn the new distillery on, which is basically a carbon copy of the old distillery from a processing point of view, we’ve got the baselines to measure. I’m not sure I’d go quite as far as agreeing about the dent—it will make a difference, but not on the scale that we operate—but since it’s been designed to make the character we’re talking about, hopefully those two things will marry up. There’s absolutely no reason why it won’t match. And my role and everybody else’s role is to make sure in 12 years time, when those products are coming out, from a liquid point of view, nobody knows what happened. You shouldn’t be able to notice. And if that happens, then again, I think we’ve all done a spot on job.

It’s good to remember it’s not the first time all this stuff has happened. Things get moved and turned on and turned off. Condensers get changed all the time. It’s the same answer regardless of if it’s £10 or £110 million pounds of impact. It’s just that the more numbers you put on, the more everybody’s eyes open!

Is there anything you’re particularly excited about with the new distillery?

I went around it last week, and I’ve never seen anything like it. It’s just mind-boggling. I started when it was a hole. I think the largest mash tun was in, because it was so big we had to build the building around it. Even if it weren’t a distillery, the building itself is achievement. The roof is just something else.

It’s alsogoing to be one of the few distilleries where everything is in one room. Normally you go from the mash room to the wash room to the tun room to the still house. And as people go through these tours, we’re saying, “Well, now you’re into distilling. Can you remember what we did in mashing?” And nobody can really remember.

Here, they’ll be able to see, and I think education for people will be really improved as a result of that. The visitors’ center will just be jaw dropping. And that’s about as much as I’ll say on that!