Nestled near the heart of the Highlands lies one of Scotland’s smallest and most impactful distilleries. In the town of Pitlochry, Perthshire, Edradour has been churning out whisky on a small batch level since the early 1800s. Operated by two men armed with just two copper pot stills: one 4,200L wash still and one 2,200L spirit still, Edradour produces roughly 18 casks a week.

Edradour originally got its start in 1825 when they first opened their doors as Glenforres under the ownership of local farmers. It wouldn’t be until 1837 that it would take on the name Edradour. The name derives from the Gaelic phrase: “Eodar Dhá Dhobhar,” or “between two rivers.” As with most distilleries around the world, ownership would change hands numerous times. However, one of the most interesting periods for Edradour would begin in 1933 when the distillery was purchased by William Whiteley. 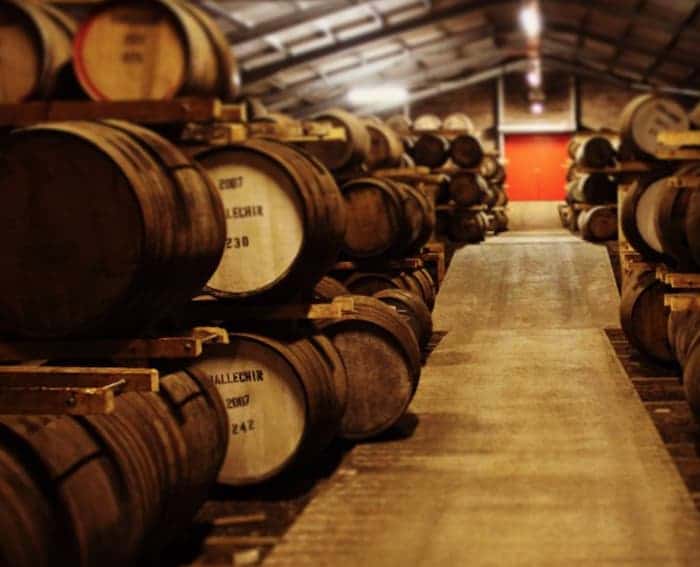 Inside an Edradour aging warehouse (image via Edradour)

Whiteley, a wine and spirits merchant turned business owner, put himself on the map with his blended whiskies House of Lords and King’s Ransom. These whiskies were reportedly held with such high regard and following that it would eventually lead Whiteley into business dealings with Mafia Crime boss Frank Castello and his associate Irving Haim. Haim would help Whiteley smuggle his blends into the United States throughout the course of Prohibition. His cquisition of Edradour only assured a continued source of quality whisky for his blends. In 1938 Whiteley would retire from his business ventures, leaving his largest shareholder, Haim, in power.

Haim would remain in charge until he eventually let go of responsibilities in the 1970s. The distillery would change hands again to Pernod Ricard before finally being acquired by Signatory Vintage Scotch Whisky Company in 2002.  An independent bottler; Signatory’s daily operations are overseen by Keeper of the Quaich member Andrew Symington.

Today Edradour continues its tradition of making big statements on small-scale production. In addition to their two stills, the distillery begins its process with a modest sized traditional, open cast-iron mash tun that can produce roughly 1.15 tonnes of mash. Edradour makes use of two washbacks made of Oregon pine.

The most interesting part of their production though comes at the end of the distillation process. Out of the nearly 130 active distilleries in Scotland; Edradour is one of only a handful that continues to use a worm tub. The nearly 100-year-old tub is a large pool of cold water that the worm (a coiled copper tube that connects to the lyne arm) rests in causes the vapors to condense quickly into a liquid. This helps the spirit maintain a rich and meaty profile that will be the backbone of its flavor.

In 2010 Edradour began aging their stocks in a traditional dunnage warehouse. The barrels rest in dark, damp conditions as they would have a century ago. Since then, these warehouses are now being used to age additional Signatory offerings.

Despite this small-scale operation and limited production, Edradour has a wide array of offerings for whisky consumers. In addition to its core line-up the distillery also offers a line of wine cask finished and matured expressions along with their Ballechin line – an expression of Edradour that is heavily peated to no less than 50 ppm that honors another farm distillery that closed their doors in Perthshire in the 1920s.

Edradour is a small distillery that is making a big impact. They may only produce in a year what its bigger bothers produce in a week, but it will be hard for them to produce something with as much love and craftsmanship as Edradour.