The world of ancient Scotch whisky has among its residents Highland Park, who is known for its rather stunning 50 year old expression distilled in 1960 and housed in a hand-crafted sterling silver bottle. Slightly younger then this offering is a recently debuted 45 year old one released by independent bottler Duncan Taylor under its Tantalus rare whisky label.

The Duncan Taylor Tantalus 1968 Highland Park was distilled the same year the Apollo 8 was the first manned spacecraft to orbit the moon, among other historical markers. It is a very limited edition bottling, holding true to the Tantalus line of older Scotch matured to at least 40 years of age (and often above). 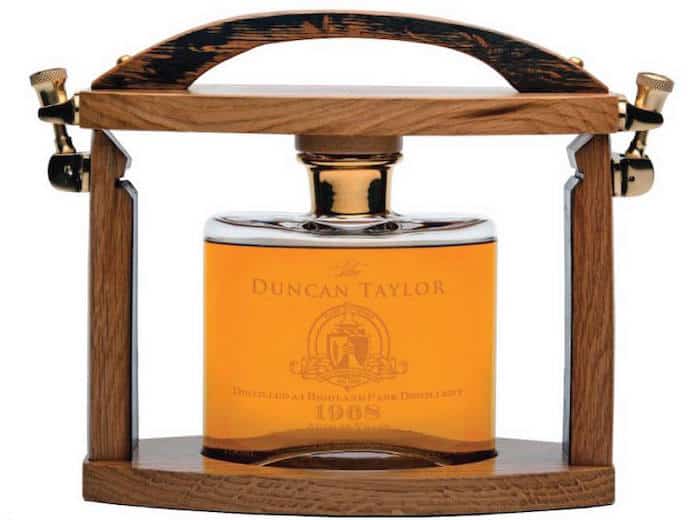 This 45 year old Highland Park comes in a special hand-blown decanter and is housed in an oak “tantalus,” said to be made from the “very casks that matured it to perfection.” It is non-chill filtered and was bottled at a natural cask strength of 41% ABV.

Tasting notes for this whisky are below. As for pricing and availability, there’s a trickle of bottles which were imported to the US back in April by Shand Import. A quick search found one of them for sale here for $3,200. It looks like there are also a few still available in overseas markets as well.

Huge fruitiness: peaches, nectarines and so much more. Gentle coastal notes. Burst of zesty avours and soft spices with the gentle coastalness coming through again. Fresh and oaky nish with vanilla and slightly salty on the edge.