The spirits company Diageo recently announced that The Singleton will release its second and final bottling in the Paragon of Time Collection, a 54-year-old, 1966 vintage single malt Scotch whisky. This is the oldest single malt release from The Singleton of Dufftown and Diageo to date, what they are calling an exploration of time in pursuit of true richness.

This ultra-limited release from the Dufftown distillery consists of only 235 bottles, making it one of the rarest expressions of The Singleton in existence. The Singleton Malt Master Distiller Maureen Robinson, as what is described by the brand as the guardian of the casks, curated and cared for this last remaining cask, which she called a legacy from the original slow-craft tradition in the 1960s and a relic from a bygone age.

“Originally filled in 1966, this European oak cask is the closest to the end of the old slowcraft period that we have ever released,” Robinson said in a prepared statement. “The old distillers of the past laid down this cask and it is a privilege for me to be able to awaken their crafted spirits over half a century later with a final chapter from today. I see it as a beautiful balance of the old art of craft and using our modern finishing to present a precious whisky of layered, balanced and exceptional richness.” 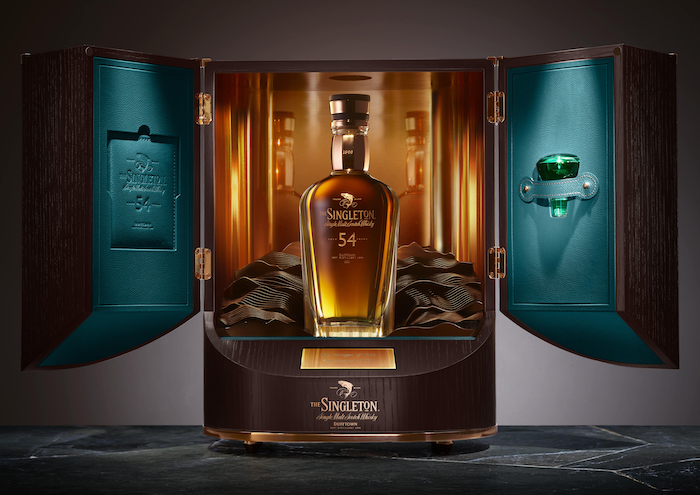 The distiller noted that for more than 50 years, the cask’s maturation revealed exceptional richness of character that only time can develop. By finishing this single malt in a single Pedro Ximenez-seasoned cask, Maureen’s handiwork looked to unveil a new layer of flavor in this whisky from the past.

Charlie Maclean, a global whisky expert, said of the 54-year-old juice, “An astonishing dram. I have never encountered a whisky like this before. A rare and unusual malt that has gained richness, mellowness and complexity on its long journey to harmony, this very old whisky shows its age elegantly and rewards proper contemplation.”

The 54-year-old is housed in a bespoke, leather-lined wooden cabinet, and the 54-layered ridged setting of the decanter display is said to be “inspired by the Scottish mountain landscape, amid wood mirroring the 54 years of maturation.” The whisky’s decanter, made of crystal, was hand-made by Baccarat in France to The Singleton silhouette, with the intricate copper detail around the neck being crafted by Royal Warrant Holders, Thomas Fattorini.

The Singleton 54-year-old single malt Scotch whisky, which comes in a 88.2 proof, will be available at specialty retailers this June with a recommended retail selling price of $40,100 per 750ml bottle. Official tasting notes are below.

Read More Whiskey News
Whisky Review: Compass Box The Peat Monster
13
Shares
4.4k
Views
Share on FacebookShare on TwitterGet Our Newsletter
Cheers to the Dads! Personalize a bottle of his favorite whiskey to create a modern gift for the modern man. Use code: FATHERSDAY20 for $20 off your next order of $100 or more at ReserveBar