Dewar’s blended Scotch whisky, owned by Bacardi, is a long storied brand founded back in 1846 by one John Dewar. It is known mostly for its iconic White Label, but also contains in its stable some age statement expressions created by its oak marrying aging process. Now joining this potion of the line up is the new Dewar’s 25 Years Old.

The Dewar’s 25 Year Old, according to those behind it, was the result of master blender Stephanie MacLeod and her team searching through cask inventory for what’s described as “an intriguing array of fine aged malt and grain Scotch whiskies aged 25 years and older.” Each cask was sampled by MacLeod and, after establishing a flavor profile in line with the house style, said casks were blended together and then filled into oak casks for an additional period of maturation. 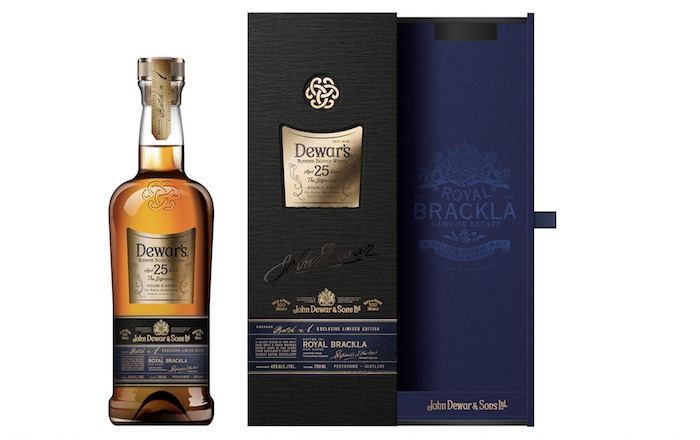 Afterwards, in something of a first for the Dewar’s brand, the whisky was then filled into a set of freshly disgorged Royal Brackla casks for an extra period of finishing. Royal Brackla is a Highlands region distillery owned by Bacardi as well.

“Dewar’s 25 is endlessly smooth, rich and elegant,” said MacLeod in a prepared statement. “Awakened on the palate: the sophisticated whisky is glorious in its harmony and balance, gently revealing layers of rich fruit, floral notes and delicate honey, with a hint of smoke to finish.”

Interestingly, in a time where non age statements bottlings are increasingly frequent, Dewar’s has gone in the opposite direction on this, with what’s being displayed on the bottle said to be a “guarantee of the age of the youngest whisky found within the blend.”

“Disclosing the ages of our blends allows discerning whisky drinkers to choose an expression with a maturity and flavour profile that matches their own character preferences,” added Fraser Campbell, Dewar’s Global Ambassador. “Dewar’s remains committed to age statements as a sign of craftsmanship and quality. In a world where aged stock is increasingly rare, we are proud to display an age on the front of our bottles”

Plans call for Dewar’s 25 Years Old, bottled at 40% ABV, to be priced at $225. It will initially be available in global travel retail before seeing a gradual roll out to certain domestic markets.